3/13/2018 ~ As I look back at the testing report I’m shocked at how inaccurate the history is, and how it perpetuates errors made by an earlier professional. I am reminded that when I tried to sue the hospital and doctors for not telling me I had “Profound B12 Deficiency” their lawyers had all my psych reports, but I was not allowed to have them.

Commentary is as I wrote it in  2005. Extreme stress and my brain injury affected my ability to type.

I don’t remember when I posted this, but it was prior to the scheduled sale of my foreclosed home at XXXXXXXXXXX, where I was (and still am) living, on the courthouse steps… which was averted by having had a friend take my Chapter 13 papers to Albuquerque and file them for me on March 21, 2005.

But then my bankruptcy was dismissed without accommodating my disability by enlarging time for me.

7/31/05 The foreclosure on my condo had just been filed, in fact Deutsche’s Amended Complaint was served in violation of the automatic stay on March 29, 2005.

It was hard to decide whether to use a blue background, because I am so BLUE about this, or green, because green is like Spring and HOPE.

Since I appear to have to make my neuro-psych tests a part of the public record in my foreclosures, I am going to post it here for what use it may be to others.

I am reluctant to make this public because of some errors in relation to the factual history that make me appear different from the truth.

One error is that I was not taken out of the psych hospital the 2nd time by Police, it was the first time. The time I had tried to kill myself and I was in St. Vincent’s. The police came to the Art therapy class where I was drawing a picture of a turtle, my turtle, Chyrsanthemum, and they took me away in handcuffs without ever telling me why or reading meany rights. I blamed them for me not ever getting teh disagnossi and treatment for my low B12. But later their attorney showed me that the hospital was ot doing tina antying in relation to the B1w2, so I tried to sue …

I cna’t type today because I am so stressed by the foreclosure sale of my home being so soon, and nothing habve ing been done about the privy pit wchihc is the cause.

Okay, so the second time I was in a psych hosptial was when the bankruptcy court coudn’t dfidn somethign I’d filed. And I said to the young woman who worked there ath if theings tha were supposed to protect me continuted not to protect me than in the furutre it was really likely I was oign to kill myself.

So she told her boss the Clerk, and he c alled the police. I mean major police came. There are relaly wide allways in the old bankruptcy bulidn in Abluquerque, and it was full of police with guns.

They took me away to the psych hospital and they woudlnt’ let me all a layers.

The head or admitting or something psychiatrist wrote that I had barricaded myself in at the IRS and threatened to kill people.

so they held htese hearings in which my prereprenstationw as abominable, totally negligent and useless and they decided to shot me up with haldol, which I think is wehre the workming memory damge got much worse, because after that I could never think again the way I had before. But when I treid to exspaolin tgo the doctors at the clinic I use dto go to , they woudl say I had a writing block.

So this part of the neuro-pscy repot on the thests is wrong. You can see waht it says, tna then you can read this and see what it not quite accurate.

I’ll try to fix this laer. But I have so many thing so tod and it atkae smoe me so long because of the brain damge.

Here are the test report pages.

This is the copy my case manager at DVR sent me when I couldn’t find my original. 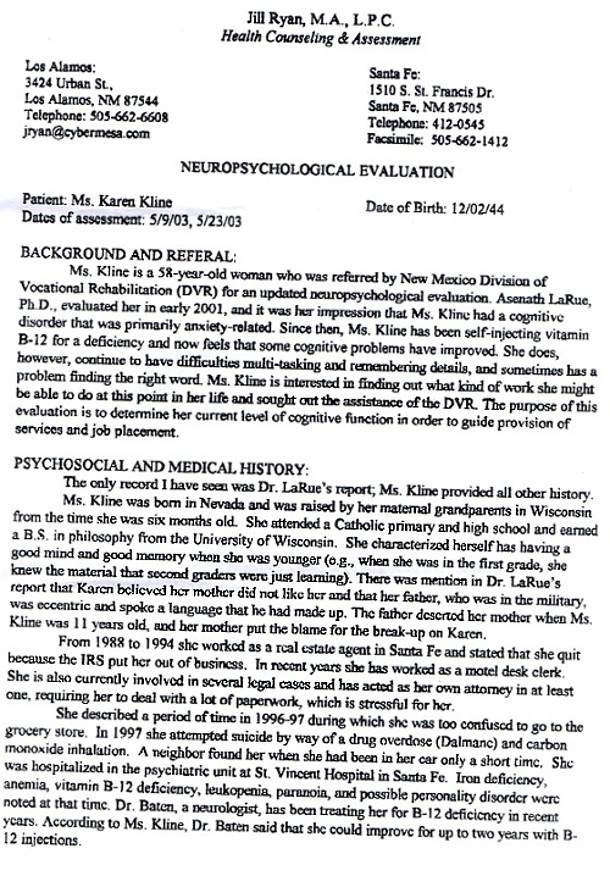 Note: I knew the second grade material only because we were in a shared classroom. I remembered what they were taught.

My father was not always in the military, but he was for a couple years when I was 5-7 years old.

My father did not speak a language he made up during the time I knew him. Rather, my mother had said that he, and his brother and sister were neglected by their parents to the point that they did not speak a known language but rather made one up. This, said my mother, hindered my father when he went to school and he had to be sent, eventually, to his aunt for special tutoring. 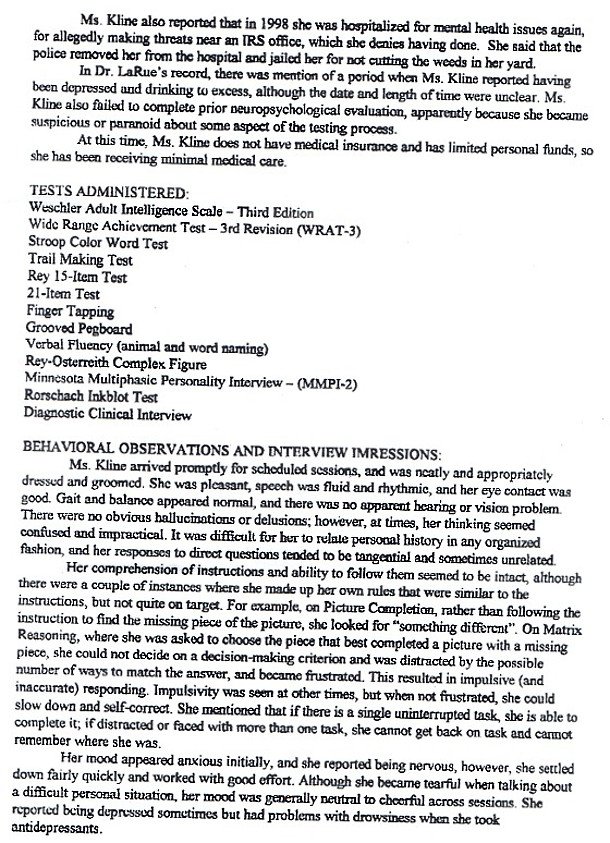 Note: This is wrong. Jill Ryan copied what Asenath LaRue had written in error. I was taken from the hospital for untrimmed shrubs by police after I tried to kill myself in 1997. In 1998 the UNM thing happened. I wrote about it at the time in my bankruptcy papers, and again recently.

When I learned that LaRue worked at UNM I became terrified that if I failed the tests she would have me put back into the mental ward. I started crying and couldn’t do more of her tests, and I didn’t go back. I forgot about the tests until I was trying to sue the doctors for not diagnosing my B12 deficiency and treating it, and I was in the same room at Dr. Baten’s for depositions. I was pro se. The room looked familiar, there was a leak stain on the ceiling that looked familiar. The lawyers all had my mental health records, but I did not have them. They were not released to me, and this is typically the case. Mental health records are withheld from the person about whom they are written. So I had never had a chance to address the errors.

When I returned from England without my son, which was the only way I could come back since I had no place I could go with him. I had to return to the States, get a job, a home, then send for him. But English Social Services obstructed me from having my son come here. It made me extremely depressed. I got up each day to go to work for the 3 p.m. front desk shift at La Posada. After work at 11 p.m. I went drinking, then home where I slept till I had to get up for work.

When I learned from a message on Dr. LaRue’s answering machine that Dr. LaRue was associated with UNM it made me so extremely nervous and anxious I could not go back to her. UNM had been a horror. UNM had been massively inaccurate, and from reading this report it appears that La Rue was also inaccurate.

My experience with UNM and forced administration of Haldol ~ Read more. 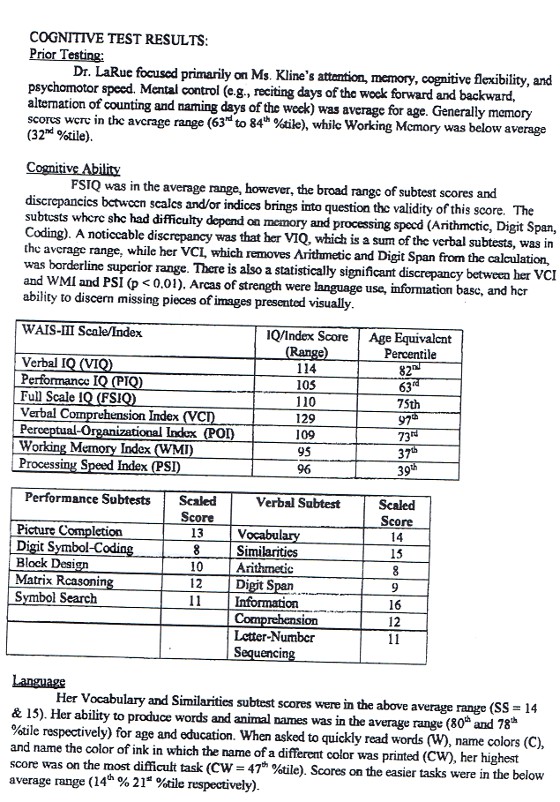 Note: I have always been good at problem solving. When I took the tests with Jill Ryan I did worse at the beginning, then as tests went on I figured out how to do better. In order to do better I had to do them my way, instead of following her directions exactly, which she said I wasn’t supposed to do. 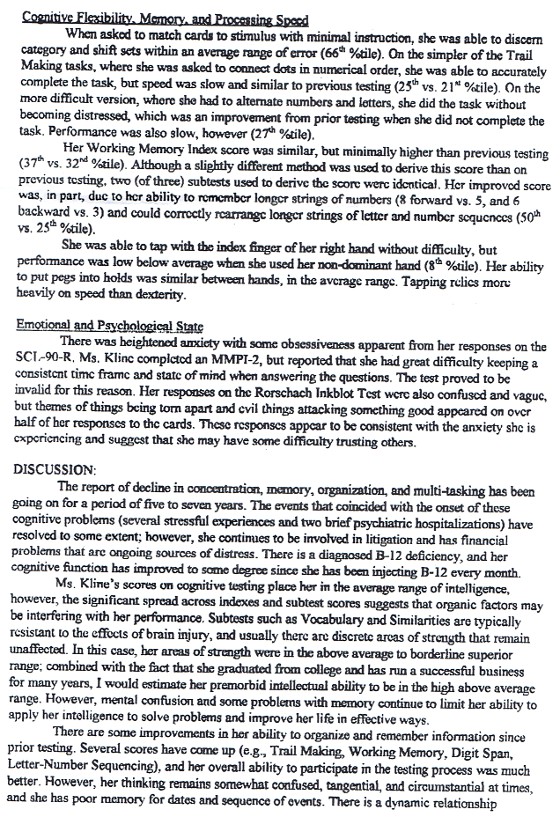 Note: Jill Ryan explained to me that the tapping with my left hand indicated something about my actual ability In terms of the speed at which I can do things because it was not my dominant hand. To this day I think I make so many typos because of my inability to do the tapping thing better.

I like the bit about my “premorbid intellectual ability” being “in the high above average range.” 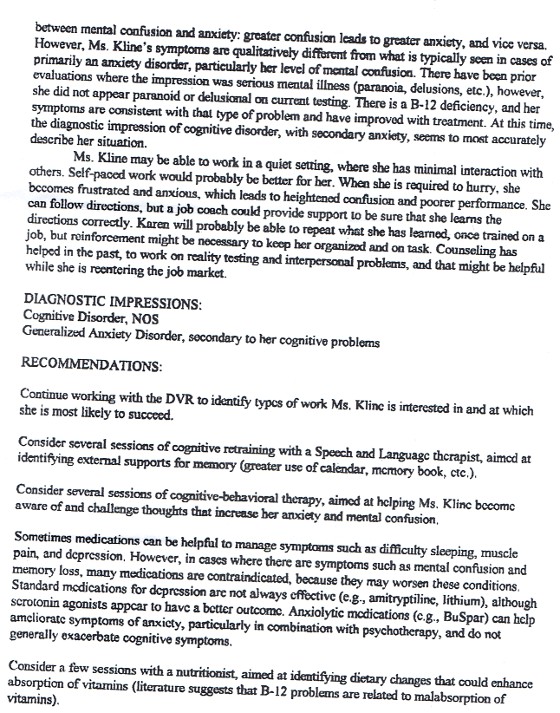 Note: From my recent research into negative ions I’ve discovered that Serotonin tends to increase the sensation of pain. 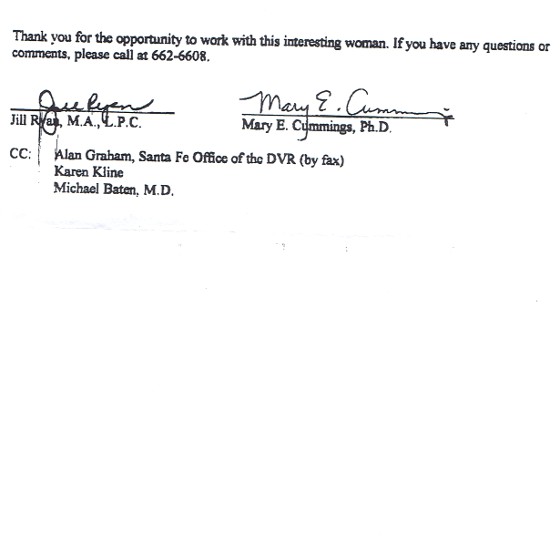 Original Notes: Oaky, so a word abougt the paranoia thing: it has to do with the pscy  hospital, UNM, where the psuyciatrist said I had barriaced by self in and threatened to kill people, only that never happened.

I mean, if htat had really hapepned int ogu would ahve been in the newspaers oand onl telly. it wans’t because is tdidn’t happen ., But
the story was so drantic and outrageious taht th ejudge wen tiwth it and ordered the haldol, even though there was NO Prove of any kind that the story was true, buecuaes the story wasn’t sture.

the judge didn’t order the lahldol he appointed someone to order it.

I think that if I were not disabled hat I would not be having so much trouble — adn I bet this is true for LOTS of other disabled people!!!!!!

I have left the errors in above because when I spend huge time correcting things, then people say I cna’t really have s disability if I cand still do the things I can.

It’s that I hae he property that I do because I was able to think clearly, work hard, exercise exective function. But now to keep my property when I have a disability, if my disability is not accommodated, then I can’t keep my property and I lose my means of taking care of myself.

It’s important to know that I tried to get the court to help me keep the condo association from spending on all sorts of discretionary common
element improvemtns while refusing to pay their share of teh common element privy pit repair. But the court did not accommodate my disability, at all. And at once point made the apparently prejudiced remark that it would see to it that I paid evrything that I owed. Thguis is without having been presented the factfrs.

My condo was built over a full outdoor toilet pit ~ Read more.

If I did not have a disab ility I woudl not be so poor because I could work. But I do have a disability and I am ppor and I am being discriminated against when I cannot get due process.
July 31, 2005 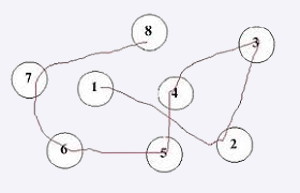 Article Name
Neuro-Psych Report
Description
I must make my neuro-psych test part of public record in my foreclosures so I'll post it here for what use it may be to others. There are some factual errors.
Author
Karen Kline
Publisher Name
Health Boundaries
Publisher Logo