Based on the fact that bacteria make all vitamin B12, I wondered if I could add B12 making bacteria, as well as probiotics, when I make yogurt, and get a higher B12 content.

The easiest approach seemed to be finding a cheese with a high B12 content, then adding bits to my yogurt mix.

Most promising was Emmentaler, first made in the Swiss city of Emmental. This Swiss cheese has 4.4 mcg of B12 in a serving. That’s not a lot, but on the other hand perhaps the bacteria, being alive, will live on in my body to make enough B12 for me to withstand the stress of Wells Fargo attacking my home.

Being housebound, I ordered Emmentaler online. After its arrival my enriched yogurt culture bubbled over the sides of jars, demonstrating, I would guess, how B12 making bacteria, propionibacterium freudenreichii, make the holes in Swiss cheese. I imagine my yogurt had more B12. I know it tasted great!

Not surprisingly strains of this bacteria have been modified enough to be patented for industrial production of vitamin B12. My feeling is that Swiss cheese has the unadulterated bacteria.

2/2/2015 ~ The whitish pigmentation beginning to show on the bottom of my middle finger and less clearly on my index finger is a result of eating Emmentaler cheese nearly every day.

So far, even fairly high stress has not removed the burgeoning moons.

5/25/2015 ~ After I began eating Emmentaler on its own I liked it so much that I stopped making yogurt. Recently I ordered American made Swiss Cheese, hopefully with the same B12 making bacteria. 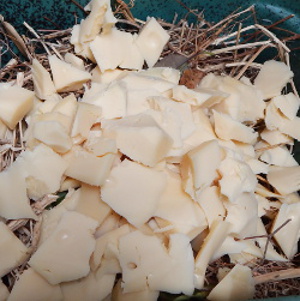 But, one batch had few holes, all tiny. And it tasted bad. Sadly, Gourmet Italian refused to make good. They said I would have to have NOT opened it, in order to send it back. To me that makes no sense. How would I know it was bad if I hadn’t opened it. When I complained on Twitter, Gourmet Italian blocked me instead of addressing the problem.

I hated to throw so much “food” away, so even though it tasted bad I had some. But, it made me sick, throwing up sick. I put the rest in my compost, see photo above. I should probably mention that the cheese developed fissures. This is before I threw it in the compost. I never saw any cheese do that before. So I’m pretty certain there was something wrong with it.

The most surprising effect of eating cheese with live B12 making bacteria is that sometimes I can remember things the way I used to. For instance, I’ll wonder if I took my Turmeric capsules, and I’ll instantly get this clear mental image. I had thought that would never happen again. Since my brain injury I’ve had to make a  great effort to remember things, and most times the effort doesn’t work.

Plus, moons are strengthening on my fingernails, and not just for a couple of weeks when there’s less stress.

I’m not using 5 of the 5 mg. Methylcobalamin lozenges a day anymore. A couple, because I don’t want to take chances like last year when I stopped using Methylcobalamin lozenges altogether. I had wanted to test whether it helped my B12 level to switch away from GMOs (and their inbuilt glyphosate) and instead eat garden veggies without washing, to keep common B12 making bacteria.

What I think is happening now is the constant supply of vitamin B12 from the live B12 making bacteria, apparently living in my digestive system, makes it easier for my body to replace B12 in my deep tissue. This is very good, but not quick.

Another effect is the multitude of brown spots on my midriff is significantly shrinking. A sebaceous keratosis (medical name for the brown spots) on my eyelid would get so large it interfered with my vision, then flake off, etc. as they do. Happily it’s much smaller.

This isn’t the first time I’ve noticed B12’s effect on brown spots. Years ago when I first had B12 shots, I had 5 brown spots in a near circle. After a few months of shots, half of the spots disappeared. But, stress abounds, and that seems to make them come back. Except now that I’m eating Emmentaler the spots are reducing in number and so far not coming back, despite a lot of stress with Wells Fargo using fraud to try and take my home.

If you like cheese, particularly any of the cheeses with holes, try eating it daily and see if it works for you like it’s working for me.

7/3/2015 ~ I’ve switched from ordering imported Swiss Emmentaler, to ordering American made “Swiss Cheese”, at about a third the cost per pound. But, I’m wondering if the American Swiss cheese has as much Propionibacterium freudenreichii, B12 making bacteria. Perhaps American cheesemakers rely on some less natural method to achieve the holes characteristic of Swiss Cheese.

The yogurt is a bit fizzy tasting, kind of like fizzy water or soda, and there’s a lot more liquid whey. But, you can clearly see “holes” in the yogurt which I attribute to happy Propionibacterium freudenreichii.

Moons have not diminished

8/8/2015 ~ My moons have not diminished. In fact, there appears to be a bit of moon appearing on my ring finger. The moon on my index finger is much clearer.

There’s a significant change in my memory. Previously I had no memory of things I just did. For instance if I fed the goldfish, as soon as I left the side of the aquarium I wouldn’t remember. In order to know whether or not I’d fed them I had to associate feeding the goldfish with something else. I chose having morning coffee. I had to feed the goldfish before making coffee. That way if I had coffee or an empty coffee mug I could tell that I’d fed the goldfish.

What’s changed is that after doing something I now frequently have a mental image of what I did. It’s exciting. It also improves life to have that kind of memory return.

Study re Commercial B12

There was an interesting study to see if B12 could be made from Sago Palm waste. Apparently large groups of people use Sago Palm for flour, wall coverings, myriad things. In any case, the study reported in the International Journal of Medicobiological Research that control Propionibacterium freudenreichii yielded 4.63 mg/ml of vitamin B12.

**Footnotes at bottom of page.

The “modified” bacteria they hoped would make B12, did not. (Sounds like bacteria, or at least this bacteria, doesn’t go along with modification. Happily.)

The study postulated that tomato pomace ~ a bi-product in the manufacture of tomato juice, ketchup and soup ~ could be effectively used as a substrate in B12 production.

It’s exciting to think eating tomato skins, seeds, etc. (tomato pomace) could provide vitamin B12 if we have Propionibacterium freudenreichii alive and well in our digestive systems.

** The medium used for production of vitamin B12 was prepared by Ye et al. The preculture medium along with the inoculums was poured into the production vessel aseptically. This setup was placed in the shaker for seven days. Propionibacterium freudenreichii 1950 was sub-cultured in 5ml nutrient broth and kept at 37 degrees Celsius for 24 hours. After incubation, it was inoculated into 20ml volume of pre-culture medium in a 100ml conical flask. After the incubation, biomass was assessed spectrophotomertically.

37* Celsius is the same as 98.6* Fahrenheit. Boiling temperature of water is 212*, so if you put Emmentaler in your soup or stew, which tastes great, you just can’t actually cook it.