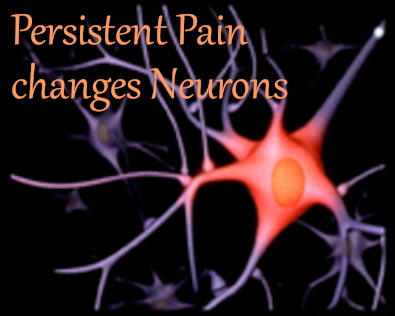 .
If you are in persistent pain, continuous, obstinate pain that goes on for a long time, it changes your neurons. Not only is the pain uncomfortable, it is changing your nerves so that your sensations of pain increase. Simply put, persistent pain ends up amplifying pain.
.
.
Prof. Jürgen Sandkühler of the Department of Neurophysiology at the Medical University of Vienna published findings in Science, in 2006 explaining “pain amplification.”
.
In Strong Feelings – Latest Findings on Pain Sensitivity Professor Sandkühler writes, “In the case of persistent pain impulses, it brings about permanent changes in the neurons responsible for transmitting the pain signals. This leads to an increase in pain sensitivity and the sensation of pain can even persist long after the actual pain signals have faded out.” Strong Feelings – Latest Findings on Pain Sensitivity ~ Read more.

“We were able to show in a controlled laboratory system that the amplification arises even when the pain is quite weak. We actually used electrical impulses that were 50 times weaker than those previously employed to induce this response.”

Prof. Sandkühler’s group was able to identify and locate the cells responsible for this previously unknown phenomenon. The cells are in the lamina I of the spinal dorsal horn, and ensure that signals from peripheral pain fibers are transmitted to spinal nerve tracts leading to the brain…

These new findings are of fundamental importance for pain therapy. As Sandkühler put it:

“Treating patients with pain killers for a short period of time after an operation, for example, is not an effective means of avoiding pain enhancement. Pain therapy must be continued without interruption until the pain has largely subsided.”

January, 2007 ~ It seems to me that the above research suggests, based upon reading between the lines, that the more calcium we take, the more pain we feel. Could this therefore be why if we take more magnesium, which is known to balance calcium, we feel less pain? and, Is this why Epsom salts reduces pain and swelling? because of magnesium ions?

Magnesium is Essential ~ Worth a Read!

Epsom Salts ~ Also worth a Read!

Diseases and injury that compromise the integrity of myelin, (the sheathing around nerves), have dramatic consequences like neuropathic pain.

Major breakthrough in the mechanism of myelin formation, by Cayouette, Chan, Innovations Report, 06.11.2006.

The study showed that a protein called Par-3 is at the base of the myelination process. This protein becomes localized to one side of the myelin-forming cells called Schwann cells, upon contact with the axon that is to be myelinated.

Par-3 acts as a sort of molecular scaffold to set-up an “organizing centre”, which brings together key proteins essential for myelination, in particular a receptor for a molecule secreted by the neurons.

The scientists found that when they disrupted this organizing centre, cells could not form myelin normally.

Since reading this research I have tried to remember to eat more protein… not just meat, but things like peanut butter. I read labels for “protein” now, the way I used to read them for “calories.” And, it makes a significant difference to my pain levels.

I was in so much pain that at one point I was thinking of immolating myself at the IRS office in town in protest of their abuse of taxpayers like me. The abuse was so stressful it was making my pain all but unbearable.

Today I’m two decades older and have almost no pain. So, what happened?

It wasn’t an overnight change, that’s for sure. Except that when I found ways to sleep better I began, right away, to have less pain.

Vitamin B12 helped me sleep better because it’s good for nerves. Nerves need B12 to be healthy. The healthier nerves are, the less they torture you with pain.

Eggs are a natural source of B12, and they help enormously with sleep.

Swiss cheese is a really good source of B12 because it has live B12 making bacteria in it. The bacteria actually make the holes in Swiss cheese… not with a hammer and chisel, of course. By putting small pieces of Swiss cheese in my yogurt culture I got a lot of fizz. That showed the bacteria were alive and well, and working hard.

The thing with eating foods like Swiss cheese, is that the bacteria begin living in your digestive system where they make B12 from things like spaghetti, which on its own has no B12.

Another thing that made a huge difference to my pain levels was stretching exercises. They are super easy and combat the stiffening that take place when we tense from pain.

I did a page about things I tried, and how they worked. You can take a look, you mind find something that resonates with you. In any case, I hope you have an end to your pain or that at the very least it becomes less intense.

Saturday, January 27, 2007 –A friend and I have been discussing the pain that we experience and how something that doesn’t seem very painful while we are doing it, can have extremely painful effects later, effects that may last from hours to weeks or months.

I will try to put things in a way that is clear and easy to grasp.

If you have a nerve disease (I am still recovering from tetanus) then you need to know that rest and sleep will make it possible for your nerves to heal.

But, while you are resting your muscles will get out of shape and so will you. This is a horrifying reality. And, so far I don’t know how to avoid it.

The best that I have been able to do is to begin with a paltry one minute of exercise a day, and work up by seconds from there.

Hard to believe, isn’t it?

But yes, for instance, while I had tetanus, while the disease was actually active as a central nervous system disease, I couldn’t lift my Brita Water Filter Pitcher if it had an inch of water in it. I couldn’t be up long enough to make a cup of coffee. Each morning I would have my longest period of time that I could be up, maybe four minutes. Then as the day wore on I could not be up that long again. I could be up three quarters of that time if I rested an hour and a half first, and so on during the day till I was bent over and hardly able to take ten steps.

But, if I rested and had B12 shots, if I did not push it, then each day I could be up maybe 15 seconds longer first thing in the morning. Then if I didn’t push it and thereby set myself back, I could be up a minute longer each day.

Yes, I am saying that at best I could add 7 minutes a week. And I am also saying that when I didn’t think that was enough and tried to do more, the pain was quickly prohibitive and did not go away in a day or two.

Graphic image of a section of the spinal neuronal network.© Use of this photo for editorial purposes is free of charge, subject to attribution: Jürgen Sandkühler