6/29/2020 ~ Ah, the days of cooking and heating with candles in my four solar panel home. It was a lovely life. Four panels provided more than enough electricity for my daily needs, except for cooking and heating. So, I made yogurt over candles on my candle cooker. (Since Wells Fargo was allowed to use false affidavits to take my home, I live in an apartment and miss my old life.)

7/19/2016 ~ I’ve been making yogurt with fruit tea. It’s fun! Tea adds delicate flavor, as opposed to jam or jelly. I’ve used Republic of Tea’s Goji Raspberry with Green Tea, which is very good. So is Mango Ceylon with Green Tea. I wasn’t fond of the Cranberry. Today I’m going to see how Orange Green Tea works.

Healthiest things to do in your kitchen?

Are you surprised salads aren’t “The Healthiest”? And, it’s not because a wide variety of salad makings have been recalled because they made so many people sick.

Yogurt, on the other hand, is rich in good, health promoting micro-organisms, which you need in your digestive tract to protect you from bad micro-organisms.

And, making yogurt is super easy.

A yogurt maker isn’t necessary, though it may help you get consistent results.

The little 6 ounce jars are fun. Plus, eating less than 6 ounces of yogurt a day has less of a healthy impact.

From experience, I know yogurt reduces asthma attacks. I reduced mine in about three months. Later asthma became a thing of the past for me.

Recently I’ve been eating a lot of plain yogurt to stay healthy and hopefully to reduce symptoms of lung and heart problems. It’s too soon to tell.

Useful tools ~
50 ounce Stainless Frothing Pitcher
Hand Held Blender ~ Or if you aren’t using coconut flakes that have to be ground, a table spoon.
Instead of a yogurt maker, you can use a 32 ounce, wide mouth Mason jar, my new favorite approach.
Milk ~
Bob’s Red Mill Milk Powder ~ 1/2 cup for a quart (32 oz.) of milk
Meyenberg Powdered Goat Milk ~ a tablespoon for flavor

If you use fresh milk you need to heat it to just before boiling, then cool it. I like the quick, powdered milk approach, described below.
Coconut flakes ~ Optional
Yogurt separates into creamy yogurt and liquid whey. If you add coconut flakes to your mixture and use a blender there’s little separation. Though, the top of the yogurt is a bit gritty with coconut. I like the texture, it’s rather fun.

You can add sweetening, like organic dark brown sugar with its natural molasses content. However, I’m reminded of Cleve Backster discovering yogurt micro-organisms going crazy when he stirred in “jam at the bottom”. My take is that there was too much sugar for them and their activity was an attempt at flight.

For starter you can use the insides of a  Probiotic capsule and some yogurt from a previous batch, if you have some saved. When I don’t have any yogurt saved I use two or three capsules of Probiotic to get the yogurt started. Add the starter to your already blended milk and coconut, mix it in, then let it set while you go to the next step.

When all the lumps are stirred/blended into oblivion, top up with hot, filtered water. You’re aiming at 32 ounces (a quart of milk) which will fill 5 of the yogurt maker glass jars with a bit in another for starter for tomorrow.

Hot (not boiling) water gets the culturing process going. Do NOT use hot water from the faucet ~ it has lead in it from soldering joints in your hot water heater plumbing.

Stirring was the least fun, so I bought a little, Cuisinart hand held blender. Happiness!!! 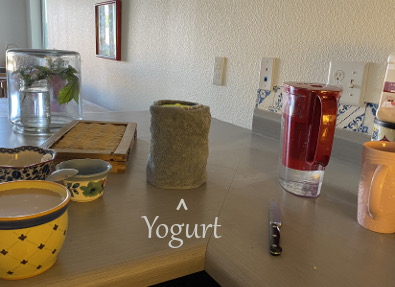 If you’re using a 32 oz. Mason jar, cover it, and wrap with a towel to keep the heat in.

Or, if you’re using a yogurt maker, pour your mixture into the little glass jars.

1/16/2014 ~ Last month my yogurt wasn’t turning out. I had to throw two batches away, which was a horrible waste of milk. And, I didn’t have enough money to order more milk. I REALLY missed having daily yogurt.

Now that I have my January Social Security I have milk on hand. I didn’t immediately make yogurt, however, because I wondered whether the problem causing my yogurt not to turn out, was lack of heat.

My yogurt maker is no doubt calibrated to reach some temperature that most often results in a healthy batch of yogurt. Undoubtedly that temperature is based on the yogurt maker being in a kitchen which is heated to some normally acceptable temperature. My kitchen is in the 50* range, which I would guess is cooler than most kitchens.

Plus, on cloudy days I have to shut off my inverter which means my yogurt maker becomes cold without electricity.

Pondering on how to make a Yogurt Oven attachment to my Survival Candle Cooker, I came up with nothing … till last night when I was having dinner in my kitchen and suddenly snapped that I had a hanging, wire-mesh veggie holder years ago. I found it exactly where I put it a few years back.

This morning I made a batch of yogurt which is presently “testing” the capability of my Survival Candle Cooker making yogurt.

I also tried using my yogurt maker, and no yogurt resulted.

I tried the same milk and probiotic mix in my yogurt maker, so whatever the problem is, it’s not limited to making yogurt over candles. I also wonder if it could be that I tried using the 8 Strains probiotic, rather than the 10 which I was using previously. I just had so little money that saving a couple dollars seemed wise. Now, possibly it was a waste for more than a couple dollars.

Or, it could be that I thought the yogurt would culture more happily if I didn’t add coconut flakes. Possibly the yogurt microorganisms like the fat in the coconut flakes, and maybe it helps them culture.

I’m trying again today… I’m using a jar of the yogurt mix that didn’t culture, as a starter… in case it has some microorganisms that are thriving, though not in large enough numbers to make a very visible difference.

First of all, the hanging yogurt maker, depending on heat from candles, did not work yesterday ~ Not in the beginning.

Today I started out with two candles under the wire basket, the same distance away as they would have been, had there been the pot of water in between.

About three hours after I started the yogurt I checked it, and to my surprise, the yogurt was firm and looking good. It tasted good, too! So, that was a lot faster than the yogurt maker.

To my even greater surprise, the yogurt at the bottom of each of the two jars ( my late afternoon snack) was steaming ~ literally steaming. It wasn’t too hot to eat, and it was great, but how amazing that yogurt microorganisms can live and reproduce at such a hot temperature.

1/29/2014 ~ Here is a smile making video of cows which were scheduled for slaughter since their calf bearing and milk giving years of highest production were over. But, instead they were given a grassy pasture. Watch as they literally jump for joy! Imagine how much healthier milk is, from happy cows. 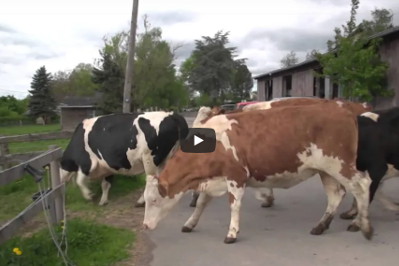