Serrapeptase, an enzyme made by silkworms to dissolve their cocoon when they’re ready to emerge, has been used in Europe and Japan for decades for pain and swelling. In 2006 my friend Maggie, a certified herbalist, sent me an email about Serrapeptase.

I’d never heard of Serrapeptase, which sounds like Sarah-pep-tase, so luckily she sent links to learn about it.

I tried it, liked the results, and have used it ever since instead of Ibuprofen for lowering pain.

“Reading on your website…about your friends with Parkinson’s. This info is very good. This enzyme (serrapeptase) dissolves amyloid plaque in the brain which is contributing factor for Parkinson’s and Alzheimers. Also great relief for any inflammations. Also for cholesterol and heart problems as well as scar tissue internally—adhesions or even keloids.

“Hans Nieper, a German doctor and scientist, discovered this natural enzyme over 20 years ago. It has been used in both Japan and Europe for several years as a natural alternative for pain relief but was not introduced into the U.S. until 2002.

“Much of Nieper’s research with serrapeptase was with clogged arteries. He discovered that only a small amount, if taken every day for 18 months, would complete the healing of clogged arteries and they would be almost entirely clear.

“Further research has been done, primarily in Japan, and they have discovered that serrapeptase safely dissolves away any dead tissue anywhere in the body and this naturally causes less pain and in many cases NO MORE PAIN. (In fact it is rumored that this is what the Doctors take when they have pain). Once the tissue is dissolved it is disposed of through the body’s normal channels.

I started taking serrapeptase about 10 days ago and I can say that this product is the fastest natural pain reliever that I have ever tried. People that have been suffering with many different illnesses have been getting relief with serrapeptase and you can count me along with them!”</div/

Okay, so that’s what Maggie wrote, including the lists. I felt the lists were a bit “snake-oil” in that they seemed to cover everything. But, the thing was, so many things are interrelated that I was willing to go with the whole of it.

For instance, I’ve had so much trouble with my vision when I’ve been low on B12. When I was reading the list it made me wonder if somehow when I’m low on B12 there’s a swelling that pressures my optic nerve. (Just a thought.)

Silkworms eat mulberry leaves and live out their life cycles in mulberry trees. It’s quite beautiful. 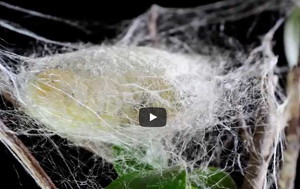 After reading the serrapeptase research, I decided to try serrapeptase for a dull but sickening pain in my back that made it impossible to be up more than a couple of minutes. I used to have intense, sharp pain that made me gasp and kept me from sleeping. It made me think when I was battling abuse by the IRS that I could immolate myself at their office because the pain would be minimally different and the demonstration might help. That pain went away with B12 therapy.

“I take the capsules on a completely empty stomach (2 1/2 – 3 hours after a meal) with a small amount of water, then I wait 30-40 minutes before eating or drinking. This was a little inconvenient at first but it has had a big payoff! I learned from the research that if you do not take it on an empty stomach the enzyme will digest your food or beverage instead of getting directly into your blood stream to digest old, dead tissue. I started with 3 tablets daily – One taken three times a day.”

What caused me to try serrapeptase was the difficulty I have breathing after even the most minimal exercise, the debilitating pain in my back, a swelling around my jaw since I got tetanus two years ago, and the protruding varicose veins on my left ankle.

How long does it take for Serrapeptase to work? After two weeks of taking Serrapeptase, religiously, waiting three hours after food, there is a reduction in the pain in my back (it was bad, so I’m not surprised that it’s diminished only a bit, rather than going entirely away — but, I haven’t been needing as much Ibuprofen.)

Does Serrapeptase work? YES! The tightness in my chest that made it hard to breathe does not bother me as much. I used to have to sit down after just the smallest amount of walking, because of the pain, and then I would notice how hard it was to breathe. Well, I haven’t been noticing that difficulty for several days.

Early on, maybe the second or third day of taking Serrapeptase, my left leg and ankle felt as if something was going on ~ I was worried because it was a strong feeling and not necessarily good. I took some photos of the varicose veins on my ankle, wishing that I’d taken some photos before I took the first Serrapeptase. I wanted to be able to see if there would be a difference.

It seemed as if the veins were protruding less after the strong feeling, and before I took the first photos, but I couldn’t say for sure because I wanted that to happen and I was afraid I might be imagining a bigger difference than there actually was.

It seemed as if the veins were shrinking, getting brighter in color but smaller in dimension, how much they stuck out. I looked and looked at them, but could not be sure from looking at my ankle and then at the photos. So I took more photos because I thought it would be easier to compare/contrast two sets of pictures rather than a real ankle to a picture of the ankle.

I’m curious if you see as much difference as I do. I see more difference than I expected in so short a time. Here are the pictures ~ don’t expect them to be pretty.)

Since I’ve been taking Serrapeptase during the night (when it’s easier to not have anything to eat three hours before taking it) I’ve noticed that some bumps/cysts I had are getting smaller. I didn’t think to take a picture in the beginning, because it never occurred to me that the Serrapeptase would affect them. Here are pictures of one of the bumps/cysts. Bumps affected by Serrapeptase

On my page about slimming, starting at 7/17/06, I’ve recorded my experience with Serrapeptase.

12/27/07 ~ I didn’t take any Serrapeptase last night because it was so cold here I just wanted to get in bed, get warm and go to sleep. And boy do I feel the difference today! I usually take two during the night and have minimal back pain, if any, during the day. Today I had a lot of back pain, to the point where it was hard to stay up long enough to do things. I’m FOR SURE going to take two serrapeptase, four hours apart, during the night tonight.

12/28/07 ~ I began to wonder yesterday if maybe the pain was related to how cold it was. In any case, I took two Serrapeptase during the night, several hours apart, and today… NO pain. It was much colder today so it wasn’t the cold yesterday that made my back hurt, it was that I’d failed to take the Serrapeptase.

11/24/08 ~ I could barely make it walking around my garden for exercise a moment ago. I worried for a moment that the Serrapeptase had stopped working. Then I remembered that I’m using a Heavy Metal Cleanse right now because I hung some Survival Blankets in my house to reflect heat, and I think the aluminum in them must come off in tiny particles because my chest became tight and began to hurt in the way it did when I was living in hydrogen sulfide.

I took the Survival Blankets down and began a Heavy Metal Cleanse: I was lucky I had about half a treatment left from some time ago. I didn’t think I should take the Serrapeptase with the Cleanse because you’re supposed to take Serrapeptase by itself… so that’s the problem: I haven’t been taking my Serrapeptase.

10/23/2016 ~ Several people have come to this page searching, “can i drink coffee with serrapeptase”. The answer is Yes. Though I think the rule about waiting at least an hour before and after holds true, especially if you use cream and sugar.

I have been using this same kind of Serrapeptase from the beginning, though I’ve purchased it from different vendors, depending on cost and availability. There’s a stronger capsule available, but the lower dose has worked fine. 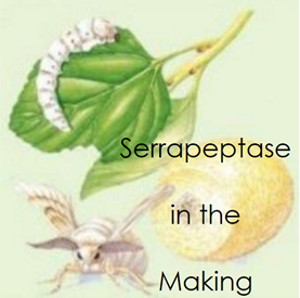 Article Name
Serra-peptase
Description
Serrapeptase, a silkworm enzyme used to dissolve the cocoon so they can emerge, has been used in Europe and Japan for decades for pain and swelling.
Author
Karen Kline
Publisher Name
Health Boundaries
Publisher Logo