What do these two people have to do with immunity?

A lot, both a long time ago, and here and now. Their story from the 1800s and their picture on this page each can help you remember things about innate immunity.

Innate immunity is your immunity that doesn’t come from an injection.

Fact is, we remember better and longer when we associate facts and meanings. Technically, doing that is called semantic encoding. Simply put, it’s as if details provide the Velcro effect.

And, just as semantic encoding isn’t complicated, our innate immunity with all it’s complexities is basically rather easy to understand.

Born in 1845 in Russia, Mechnikov, also spelled Metchnikoff, was interested in natural science as a child. By university his growing interest swept him through a four year course in two. At 23 he met his first wife who had tuberculosis so badly she had to be carried to church for their wedding.

Despite his every effort, she died five years later. Heartbroken, he tried to take his own life.

Two years later he met and married Olga. When she contracted severe typhoid fever Mechnikov became pessimistic and carried out a life threatening experiment on himself, perhaps as a way out of his hopelessness, either by death or finding some good. In any case, he survived.

By 1882 they had children and he had his own private laboratory. Around Christmas he observed mobile cells in starfish larvae that he thought might be part of starfish defenses.

To test his idea he took small thorns from a tangerine tree acting as a Christmas tree for their children and put the thorns into the starfish larvae. Next day he saw mobile cells surrounding the thorns.

Mechnikov named the mobile cells phagocytes and in 1883 wrote a paper on phagocytosis, the ingestion of bacteria and other material by phagocytes.

Determined to further prove his theory he went to Paris in 1888 to see Louis Pasteur, recognized today as the Father of Immunology, with his name kept current in “pasteurizing” milk.

Pasteur gave Mechnikov, recognized today as the Father of Natural Immunity, a laboratory and appointment in the Pasteur Institute where Mechnikov worked on his theory of innate, cellular immunity, and stayed for the rest of his life.

In 1902 Mechnikov pubished, L’Immunité dans les Maladies Infectieuses, (Immunity in infectious diseases), and in 1904, gave a public lecture, “Old Age” that catapulted him and his revolutionary idea to fame.

Mechnikov’s revolutionary idea, that harmful bacteria in the intestines caused aging, came from observing remarkable longevity in Bulgarian peasants who ate yogurt and other types of soured milk every day.

He urged his audience to boil fruit and veg to kill dangerous bacteria and to eat yogurt and other types of soured milk to cultivate beneficial bacteria. So began a multi-billion dollar yogurt industry. 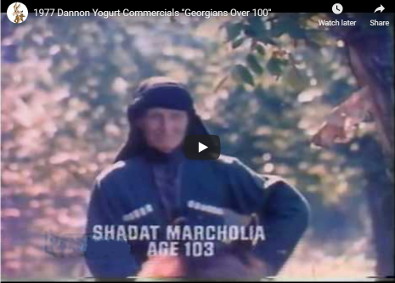 For the record, L. bulgaricus was first isolated from Bulgarian yogurt in 1905 by Bulgarian doctor and microbiologist, Stamen Grigorov.

Significant research has shown that yogurt defeats h.pylori, the bacteria that burrows into the stomach lining leading to ulcers and eventualy stomach cancer.

In 1908, yogurt’s popularity grew when Mechnikov was awarded, together with Paul Ehrlich, the Nobel Prize for Physiology or Medicine.

In Mechnikov’s zeal for the healthy benefits of friendly bacteria he drank sour milk every day. Nevertheless he died at 71, most likely due to the lasting effects of severe diseases he had infected himself with in his early years when he was overcome by depression at the death of his first wife and the life threatening typhoid of his second wife, Olga.

When he died at a mere 71, the mass popularity of yogurt, tied to life expectancy of 100+ years, plummeted, but not without yogurt first being introduced to the West.

The microbiome is the genetic material of all microbes — bacteria, fungi, protozoa and viruses — living in the human body. Let’s call them Bulgaricus and friends.

When taken together, the genes of Bulgaricus and friends are 200 times greater in number than the genes of a person’s human genome.

Our bacteria friends, who exist in trillions in a healthy digestive system, protect us from bad, pathogenic bacteria. Not only that, good bacteria help with digestion, stimulate the immune system, and make vitamins B1, B2, B5, B6, folate, B12, and K2. 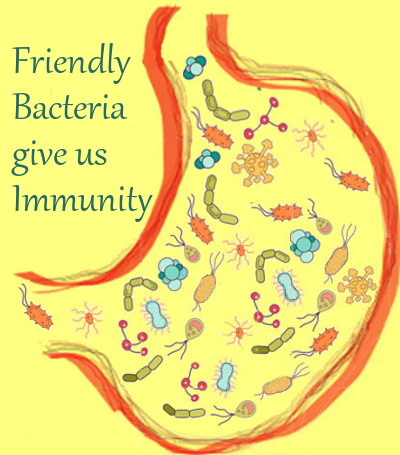 Good bacteria are an integral part of our metabolic system. Humans and friendly bacterial strains, living in close proximity and mutually beneficial, are a good example of symbiosis.

It may surprise you that the microbiome, weighing as much as five pounds, is coming to be understood as a specialized organ with constant communication between intestinal bacteria, the brain, and central nervous system – similar to other organs’ communication.

Let’s give thanks to Mechnikov for recognizing innate immunity and giving rise to this valuable knowledge concerning our health.

And, let’s give our bacteria friends the kinds of food they need to thrive, not processed foods. Almost all processed foods contain glyphosate from RoundUp ready crops like corn and soy. Glyphosate kills good bacteria.

Sure, the amount of glyphosate in processed foods is tiny, but… in comparison to the size of your trillions of friendly bacteria, it’s not tiny.

Vitamin B12, absolutely necessary for healthy blood and nerves, is produced exclusively by bacteria. Yet, vitamin B12’s bacterial origins were apparently only recently discovered. And, who in particular made the discovery seems to be beyond the bounds of Google.

When I learned that B12 making bacteria are plentiful in the air, soil, and sea, I decided to try eating veg from my garden without washing so that I’d get the tiny, natural amounts of B12.

When winter came I forgot to adjust for no longer eating veg from my garden. Without natural, bacteria B12 and without lozenges my low vitamin B12 health problems returned.

For instance, vegetarian Indians in India seldom had vitamin B12 deficiency, while Indian migrants living in England frequently suffered deficiency.

Subsequent investigations in India revealed that vegetarian Indians had within their digestive systems certain bacterial strains that produced B12.

The increasing prevalence of vitamin B12 deficiency in India could, therefore, be a result of “better” hygiene. Hygiene is defined as conditions or practices conducive to maintaining health and preventing disease.

One has to wonder whether the rampant use of Purell to sanitize ones hands is more, or less healthy.

The downside of germ free

In 2019 the Journal of Neuroinflammation published a paper on the human nervous system’s development and maturation. Alarmingly, it cited studies showing animals treated with broad spectrum antibiotics, or reared in germ free environments had neurological deficiencies in learning, memory, recognition and emotional behaviors.

In humans, evidence of the interplay between gastrointestinal pathology and neuropsychiatric conditions has been shown in anxiety, depression, and autism [12, 16].

Gut microbiota modulate the development and homeostasis (the tendency toward a relatively stable equilibrium between interdependent elements, especially as maintained by physiological processes) of the central nervous system in relation to immune, circulatory, and neural pathways.

Interaction between gut microbiota and the immune system is key to innate and adaptive immunity and signaling pathways. This is true in central nervous system disorders such as  Parkinson’s disease, Alzheimer’s, multiple sclerosis (MS), and gliomas.

With a healthy enough gut, meaning full of happy, healthy microbes, people would find their body producing its own supply of vitamin B12.

Poor intestinal health (resulting in malabsorption) is one of the main causes of vitamin B12 deficiency.

The whole point of vaccines is immunity, right? Immunity translates to safety from pathogen bacteria. But what if the real seat belt in this pandemic world is good bacteria, and killing them off is more dangerous than we commonly understand?

Vaccines can have adverse effects, so while they offer safety, they are inherently risky. Whether very risky, or a little, relates to how healthy a person is in the first place.

There’s a strong desire to correlate health with the absence of dangerous pathogens. Masks, washing hands, social distancing are a part of the “absence” theory and protocol.

There’s another way to look at health and pathogens. Instead of taking the “I’m better off alone, in isolation” view, sanitizing our hands repeatedy, we can look into the ongoing war in our bodies between good bacteria, and bad, and the starring role of our nerves.

The immune system and the nervous system maintain extensive communication, including ‘hardwiring’ of sympathetic and parasympathetic nerves to lymphoid organs. Neurotransmitters… modulate immune activity. Neuroendocrine hormones… regulate cytokine balance. The immune system modulates brain activity, including body temperature, sleep and feeding behavior. Molecules such as the major histocompatibility complex not only direct T cells to immunogenic molecules held in its cleft but also modulate development of neuronal connections. Neurobiologists and immunologists are exploring common ideas like the synapse to understand properties such as memory that are shared in these two systems.

Though most polysyllabic words were removed, many remain. Absent is any mention of bacteria, perhaps because flu is viral, perhaps because the systems were investigated in relation to each other, not with an eye to the supporting role of bacteria. Nevertheless, you get the picture.

Ever since my apartment building’s sewer backed up into my bathtub, and my kitchen drain bubbled and splashed until a ragged edge in the sewer’s improper installation was found via a camera, and removed, I’ve had health problems. I’m thinking bad microbes.

Initially there was severe dizziness. Next came loss of balance, widespread redness, swelling, itching that made for sleepless nights, and rash-like pimples.

I can get rid of the swelling, itching and rash with vitamin C, but vitamin C causes diarrhea after a certain point, and I keep reaching that point.

Then, out of nowhere, akkermansia muciniphila

I happened upon Dr. Gundry waxing enthusiastic about akkermansia muciniphila in an interview . Impressed, I went looking for a probiotic containing something beginning with “a” ~ that’s all I could remember. I found nothing.

I watched the interview again, captured the name phonetically, turned to research, and quickly saw that it’s not a benign cure-all. There could be a downside for some people, plus, we apparently already have it in our guts, we just need to up our care and feeding.

With that understanding, I ordered Dr. Gundry’s Total Restore.

I trusted Dr. Gundry because after watching his lectins video I stopped eating the seeds in chili peppers and felt improvement. He’d drawn me into his video by holding up a beautiful tomato and saying we might have a misunderstanding about them, as well as other “healthy” foods. He slowly built up to the dangers of lectins in beans, tomatoes, pepper seeds. (He’s certainly as good a salesman as he was a heart surgeon, and he was one of the best.)

I remembered a news segment, when I lived in London, reporting that people were getting sick from kidney beans prepared in slow cookers. Apparently slow cookers in the 70s never reached boiling; kidney beans cooked from scratch had their lectin poisons remain intact.

I ordered Total Restore and began using it as well as eating yogurt every day, and making Kefir which contains:

“It’s been accepted really since the turn of the 20th century, since the time of the Spanish neuroscientist Ramón y Cajal, that really the only place where memories can be stored is at synapses, the junctions between nerve cells” said Bliss, visiting worker at the Francis Crick Institute at Mill Hill, London. It was during his work in the early 1970s on the brain region known as the hippocampus that Bliss first demonstrated the so-called Hebbian principle, according to which, he explains,“if nerve cell A is connected to nerve cell B, and A takes part in firing B then the synapse, the connection between A and B, will be strengthened.” This mechanism by which synapses are strengthened underpins the formation of memories and is now known as Long Term Potentiation, or LTP.