GMO vs nonGMO nutrient content – There’s a Big Difference. But, neither GMO nor Non-GMO corn is labeled as such. You can, however, choose produce and products which are NOT GMO by selecting “Organic”.

The GMO vs nonGMO nutrient content chart is based on two corn samples taken from side by side fields. The tests were done because a third party client wanted corn without glyphosate.

As an aside, EPA’s level of glyphosate considered safe for humans has been raised from 6 ppm to 13 ppm at the request of Monsanto despite the fact it has been shown that much smaller amounts of glyphosate kill beneficial bacteria that we need in our bodies.

If you’ve been convinced by the slew of videos telling you GMO foods are fine, especially the video by Neil Degrasse Tyson in which changes to genetics caused by cross fertilization are said to be the same as genetic modification, you may think differently about GMOs after listening to this farmer !

Notice how there’s formaldehyde, glyphosate, chlorides, anaerobics and unhealthy chemicals in GMO Corn. There are some nasty anaerobics.

GMOs into the Compost 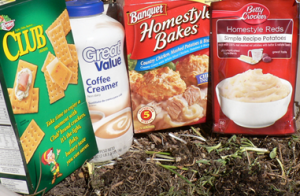 Look at these trusted products. They all contain soy, corn, and/or canola oil. All of which are GMO. If these look good to you ~ check out the GMO vs nonGMO nutrient content chart. The nutrition of soy, corn and canola oil are compromised. They’re okay for compost, though. Composting is amazing: its microbes change even pesticides into something harmless, even Good. Love the Microbes!

In the first picture I forgot the Soy Milk. It had been advertised as Vegan and organic, but the product label did NOT say NON GMO. There is labeling, you know, if it says Organic, or NON GMO it’s good and safe to eat.

The GMO connection to weight gain

If you eat a big meal and are still hungry, that could be because your body is trying to keep you healthy.

To be healthy we need vitamins and minerals. For example, we need magnesium to keep from having leg cramps and to better withstand stress; we need vitamin B12 for healthy nerves and red blood cells; etc.

When we buy groceries we may check for calories, fats, protein, even sodium. A variety of other nutrients, like magnesium and potassium, are important but not listed. We may believe that if we need unlisted nutrients, and they are generally in food, that they are in the groceries we buy. But, while they were generally in food 20 years ago, they are no longer in food in anywhere near the same quantities today if we are buying genetically modified (GM) foods.

The data in the GMO vs. Non-GMO corn chart shows that Magnesium is 2 ppm in GMO corn, while it is 113 ppm in Non-GMO corn. So, if your body needs magnesium and you’re eating corn, your body doesn’t want you to stop eating corn until you have eaten as much as 56 times the amount of GMO corn as it would need you to eat of Non-GMO corn. Your body is simply alerting you, when you continue to feel hungry, that you still need to give it more nutrients.

Clearly in this situation you may gain weight as your body tries to keep you healthy but fails in the face of GMO foods.

Personally, I lost 20 pounds by switching from GMOs to organic food. And, gastrointestinal problems that I’d had for well over a decade went away. I don’t eat yellow corn anymore because of reports that Monsanto GMO corn has contaminated virtually ALL American yellow corn. On the other hand, I believe Burpee when it says their seed is NOT GMO, and I’m attracted to their Corn On Deck Hybrid that can be grown in containers.

If you are dealing with depression, ADHD, a psychosis, or another mental health problem you’ll enjoy this video about how nutrition out performs medications when it comes to mental health:

Micronutrients to include phytochemicals and trace minerals like molybdenum make a significant contribution to Good Health. Even though they are needed in only the most minute amounts, they are prerequisites if your body is going to produce enzymes, hormones and other substances that are essential for proper growth, development, and ongoing health, both mental and physical. Be aware that GMO foods have lower amounts of micronutrients. See chart, above. 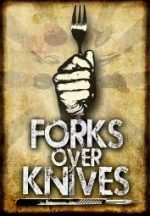 After seeing this film you will think differently than you ever did before about much of the nutrition advice we’ve relied on for decades.

Forks Over Knives
.
Also, have you seen Food Inc.

What’s RoundUp got to do with it? 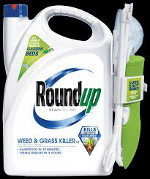 You may be surprised. 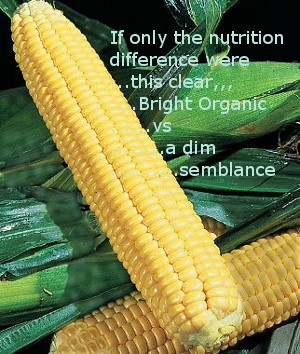