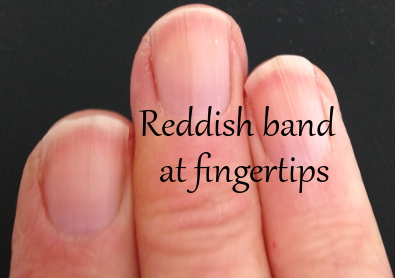 11/30/2020 ~ Medical terms associated with a reddish band under fingernails, at the tips of fingers, are Terry’s Nails and Raynaud’s. These terms, being medical in nature, are often used in disease related ways.

For instance, Terry’s Nails are said to accompany adult-onset diabetes mellitus, chronic renal failure, pulmonary tuberculosis, and Reiter’s syndrome, a form of arthritis causing pain, swelling, redness, and heat in the joints, particularly those of the spine and areas where spine and pelvis attach.

Some medical references end with a disclaimer: Terry’s nails might simply reflect an age-related phenomenon.

In advanced cases of Terry’s Nails the fingers can turn white, from finger tip to a knuckle or two down, or turn bluish.

Raynaud’s (ray-NOSE), referred to as a disease, phenomenon, or syndrome, almost interchangeably, can accompany lupus, rheumatoid arthritis, Sjogren’s syndrome (dry eyes/mouth and difficulty swallowing), arteriosclerosis (thickening of blood vessels carrying oxygen and nutrients from the heart to the rest of the body), carpal tunnel, and use of some medications like beta blockers, migraine medications containing ergotamine and sumatriptan, some attention deficit medications, and some over the counter cold medications.

Terry’s nails and Raynaud’s have to do with blood supply and nerves. When your nerves transmit a message that it’s cold, your blood vessels and arteries restrict blood flow to your skin to reduce heat loss and preserve your core temperature.

That’s only one of the ways your hypothalamus, the almond-sized area above your brainstem, controls heat regulation. When it receives a message that your nerves are sensing cold, your hypothalamus can signal your muscles to shake rapidly, or in other words, shiver.  This increased activity generates heat.

Or, your hypothalamus can make the tiny muscles around your hair follicles squeeze together, forming goose bumps to trap warm air near the skin.

Or, your hypothalamus can “give you the idea” to hug yourself, which effectively reduces the amount of your body exposed to the cold.

Or, your hypothalamus can make you go pale by directing the majority of your blood to your organs, to keep them safely functioning.

Typically, low temperatures cause blood vessels and arteries to narrow, This reaction, called “vasoconstriction,” decreases blood flow to the skin, which helps to minimize heat loss from the warm blood and therefore preserve a normal internal or “core” temperature.

restricting blood flow and reducing oxygen to the heart. Your heart must pump harder to circulate blood through the constricted blood vessels. As a result, your blood pressure and your heart rate increase. In Raynaud’s blood vessels to fingers and/or toes become narrow and limited when exposed to cold or stress. Over time, these small arteries can thicken slightly, further limiting blood flow.

12/5/2019 ~ Bands of red have appeared under my fingernails at the top of my fingers. My fingertips are painful after very little typing and there appears to be some color change at the tops of my fingers, which I hadn’t really noticed until I was looking at the picture above. The band of red is generally referred to as Terrys Nails. The color change seen in my fingers could indicate Raynaud’s which can show up when someone is tense, anxious and stressed. The other listed symptoms certainly apply in my case: pain, numbness, pins and needles, and difficulty moving the affected area. It has been making it very hard to play computer games because I can’t control the cursor. A lot’s been going on that accounts for the downward trend in my health.

Terry’s nails were first described by the British physician
Richard Terry, who investigated this nail-bed abnormality in 82 of 100 consecutive patients with hepatic cirrhosis.2 In more than 90% of those patients, the cirrhosis was
due to alcohol abuse. The nail changes were composed of
a discoloration, which stops suddenly 1 to 2 mm from the
distal edge of the nail, leaving a red to brownish transverse band of 0.5 to 3 mm width and nearly always
corresponding to the onychodermal transition.2-5 Six
months later, Terry observed such red half-moons also in
patients with congestive heart failure.4 He presumed that
red half-moons result from abnormal adhesion of the
nail-bed to the nail, but until now a generally accepted
pathophysiologic explanation has been missing. The biochemical circumstances leading to Terry’s nails are
rather related to the underlying disease and not causally
associated to the nail disorder. Histopathologic findings
from patients with Terry’s nails demonstrated changes in
vascularity, in particular distal telangiectasias.3 Other
colleagues disclosed further systemic disorders that are
highly associated with Terry’s nails, such as adult-onset
diabetes mellitus, chronic renal failure, pulmonary tuberculosis, and Reiter’s syndrome.3,5-7 However, Terrys
nails simply might reflect an age-related phenomenon