RoundUp kills weeds because of the Glyphosate it contains. Glyphosate inhibits an enzyme needed in the synthesis of the amino acids: tyrosine, tryptophan and phenylalanine. When a plant can’t make these proteins it can’t grow and in fact dies.

Monsanto chemist John E. Franz discovered Glyphosate in 1970. Monsanto brought glyphosate to market as Roundup and soon found that killing weeds was a huge money maker. But imagine the profit if RoundUp could be used with crops, without killing them.

Enter, GMO crops, developed to be “RoundUp Ready.” That is, you could use RoundUp all around “RoundUp Ready” plants and the plants wouldn’t die, or… weren’t supposed to. In India 250,000 farmers have committed suicide when they couldn’t repay debts because their RoundUp Ready crops failed. In essence, RoundUp kills hopes and dreams as well as the will to live.

The insidious problem with RoundUp Ready plants that don’t die and become “food” crops is that they contain glyphosate in amounts which are small, but not safe. This is why it’s accurate to say, RoundUp kills.

Basically, Glyphosate (N-(phosphonomethyl) glycine) is a broad-spectrum systemic herbicide. It’s used against broadleaf weeds and grasses that compete with non-weed plants and crops. You will often see RoundUp pictured with dandelions because the glyphosate in RoundUp kills dandelions.

But, bees love dandelions. When you use RoundUp, Bees are collateral damage. And, not just because you’re killing one of their natural food sources. Rather, because all plants in a RoundUp saturated area, even if the RoundUp is meant protect plants, end up containing glyphosate. Plants containing glyphosate are basically poisonous. An interesting chart shows the glyphosate content of a GMO food, in contrast to a nonGMO food. 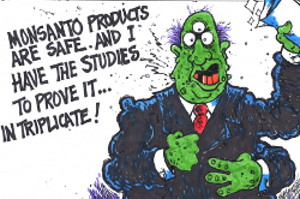 Philip Miller, Monsanto vice president for global regulatory affairs, said he didn’t see how the World Health Organization could reach this conclusion. Perhaps it’s not surprising he said that since Monsanto’s $15.9 billion of annual sales are closely tied to RoundUp and glyphosate.

Monsanto lobbyist runs away when asked to drink “harmless” pesticide.

The video’s lesson for lobbyists: eating your words is a lot safer than drinking the poison you help sell.

How does Glyphosate work?

Glyphosate inhibits an enzyme needed in the synthesis of the amino acids: tyrosine, tryptophan and phenylalanine. When a plant can’t make these proteins it can’t grow and in fact dies.

Although glyphosate/RoundUp is applied to “weeds”, a lot gets on the surrounding ground where it affects other plants and life forms.

Monsanto fights the notion that crops from its Roundup Ready seeds are in any way bad for us to eat. Monsanto has its lawyers escalated to high-up government positions, like Clarence Thomas in the U.S. Supreme Court, and Michael Taylor in the FDA. The latter is thanks to President Obama, and if Americans knew, should have kept President Obama from re-election.

Monsanto’s studies assure critics that plants genetically modified to work with glyphosate are equivalent to organically grown plants. There is an underlying question, however: Are GMO crops really equal to Non-GMO crops when it comes to nutrition?

With that question in mind, look at the comparison of GMO Corn to Non-GMO corn on a nutrient level, keeping in mind that the low mineral content in the GMO corn matches up with deficiencies in a human being that lead to sickness, disorders and cancer. People with osteoporosis, for instance, are low in calcium and magnesium. People with cancer are low in manganese. And so forth. Now, look again at the GMO corn vs. Non-GMO corn chart ~

I learned a lot from this Must Watch Video – The health dangers of RoundUp (glyphosate) herbicide. Jeffrey Smith and Researcher, Stephani Seneff, PhD.