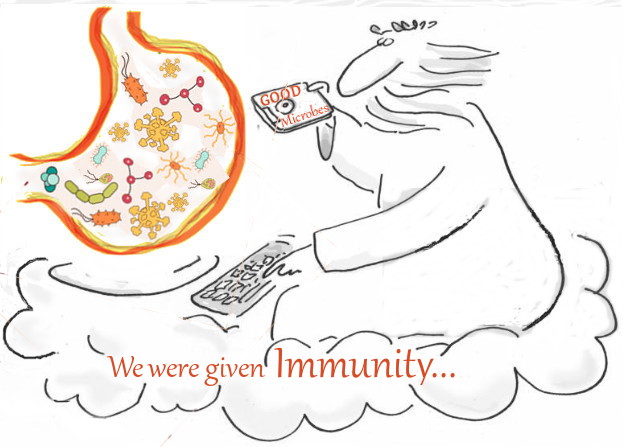 We were given immunity.

12/12/2020 ~ We were given immunity. The image whimsically shows God programming us, putting good bacteria into our digestive system as if good bacteria could be downloaded from a hard disk.

We’re all pretty much familiar with dangerous viruses being downloaded into computers. Most of us have purchased virus protection for our computers and smart phones, so it’s an easy leap to accept the idea we need to get some sort of product to protect us, our bodies, from the Coronavirus.

But, unlike our computers, our bodies are not man made.

“Oh Incomprehensible Creator,” began my favorite prayer when I was young. And, it’s apt. Incomprehensible is a fitting word. Our immunity is so much more complex than any computer system, however “genius” Bill Gates is, or thinks himself.

For one thing, our immunity did not come to us as a boxed version that would need replacement as new versions become ready for marketing.

Our God given immunity is so much more complex and beautiful than even the most advanced computer operating system.

One of the most amazing, beautiful parts of our immunity, is that the world, all of creation, can be a part of it. It’s that stupendous!

Studies have shown that when a lab animal is isolated from all sources of bacteria, it lacks immunity. Lab animals who have been given a sterile environment, are sickly.

So, when we think about it, God gave us immunity by giving us a whole world of beautiful things, and so many invisible to the eye good bacteria to work for our well being as they live and flourish in our digestive system.

Where is the “whole world of beautiful things”? Where is this beautiful nature, given to us by God? There are National Parks. Right? Except there are many who see them as the domains of the elite, since so few ordinary Americans can afford to travel to them.

Plus, National Parks are highly managed, to give the appearance of untouched nature.

There is a great TED talk (above), Nature is Everywhere. It’s in our backyards, it’s in that city park just a few minutes from your apartment. My favorite is the wild nature Emma Marris shows in abandoned city areas. For instance, “Philadelphia has a cool abandoned elevated railway that’s become a secret wilderness.” 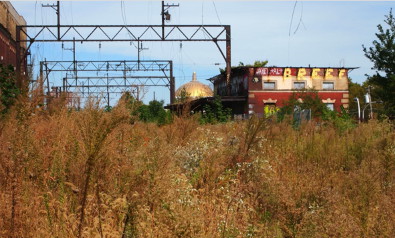 “If you know where the hole is in the chain link fence, you can scramble up to the top and you can find this completely wild meadow just floating above the city of Philadelphia.”

She has another example, a man who didn’t mow his backyard for 2 or 3 years, then called in a team to study the variety of plants. 360! And, two on the endangered list.

How does this relate to immunity? The beautiful complexity of nature has within it the  makings of strong immunity for us. We just have to get out into it, touch it, enjoy it.

Contrast that to the mechanical canary: 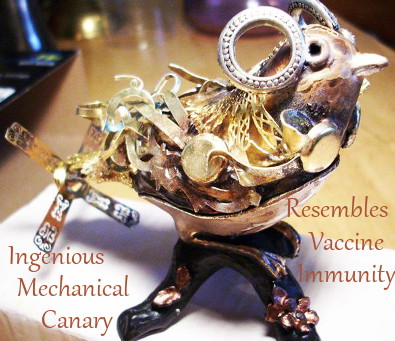 In one camp we protect ourselves by wearing masks, sanitizing our hands, social distancing, often staying home altogether, and we are looking forward to a vaccine to reduce the tremendous worry about infection.

In the second camp we avoid masks in the belief they trap pathogens we already have in our bodies, making us prone to bacterial pneumonia. We don’t use hand sanitizer. We don’t socially distance when we have a choice; we happily go out, basking in sunlight, even joining large groups, and we invite family and friends in. We feel healthy and sure that if we get Covid we’ll shake it off with the help of our natural immunity.

So, what is our natural immunity? Where does it come from?

Whether we believe in a Supreme Being loading our digestive system with health-giving, good bacteria, or not, the image could just as aptly have been a mother-to-be giving her baby good bacteria.

Though, for centuries the prevailing belief was that a mother’s womb was sterile. The microbial populations found in babies were attributed to their contact with the birth canal.

Plus, it was shown that babies who entered the world by natural childbirth had the same kinds of microbes as their mothers while babies born by cesarean section had microbes similar to those identified in hospitals. (After about a year, the microbe populations are similar.)

Then, in 2011, Indira Mysorekar, a microbiologist at Washington University in St. Louis, focused research on 195 placentas from a single hospital. In 26% of full term births there were diverse bacteria in the cells on the maternal side of the placenta, while in 54% of  preterm births there were bacteria in the cells on the mothers’ side of the placenta.

There was an, “Oh! Oh!” reaction to the implication that bacteria were causing preterm births.

While there was a willingness to accept the fact of bad bacteria, the overall view of the sterile placenta prevailed. The explanation that was adopted was that if bacterial DNA was found in placentas, then obviously there had been contamination.

But, Kent Willis, Assistant Professor of Neonatology, University of Tennessee, and his colleagues, collected samples of meconium, the tar-like material babies pass within a day or two of birth, from 37 mature-term babies born after 37 weeks of pregnancy and samples from 34 preterm babies.

Willis and colleagues grew microorganisms from the meconium in an airless environment mimicking that of the gut, then catagorized the microbes according to their DNA.

To their surprise they found microbal DNA in nearly all the babies – even preterm infants born after 23 instead of the normal 40 weeks of pregnancy.

The differences in gut bacteria and fungi between preterm and term babies were very consistent and stark. It was possible to accurately predict whether the meconium sample came from a baby that was full-term or premature. Read more.

The gradual increase in the amount and kinds of microbe, depending on how long the baby stayed inside the mother before birth, supports the idea that colonization by microbes is a natural process and that microbes slowly and steadily accumulate in the fetus during pregnancy.

After birth the good, health protecting microbes face the danger of glyphosate, RoundUp’s main herbicide, in mothers’ breast milk and in trusted brands of baby food.

For instance a study reported by Sustainable Pulse in 2014 found levels of glyphosate in American women’s breast milk that were 760 to 1600 times higher than levels found in that of European women. “The shocking results point to glyphosate levels building up in women’s bodies over a period of time,” wrote Sustainable Pulse. 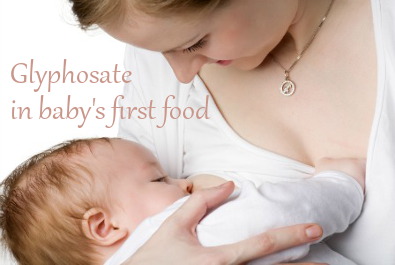 Monsanto, the original developer of RoundUp, and RoundUp’s current owner, Bayer, have scientists who say glyphosate does not build up and is safe. A closer look at the corporate studies, however, shows that tests beyond three months duration were not conducted… perhaps because after three months accumulation would have been hard to deny.

The The National Center for Biotechnology Information , NCBI, had an interesting paper Glyphosate, pathways to modern diseases II: Celiac sprue and gluten intolerance.

Celiac disease, and, more generally, gluten intolerance, is a growing problem worldwide, but especially in North America and Europe, where an estimated 5% of the population now suffers from it. Symptoms include nausea, diarrhea, skin rashes, macrocytic anemia and depression. It is a multifactorial disease associated with numerous nutritional deficiencies as well as reproductive issues and increased risk to thyroid disease, kidney failure and cancer. Here, we propose that glyphosate, the active ingredient in the herbicide, Roundup®, is the most important causal factor in this epidemic. Fish exposed to glyphosate develop digestive problems that are reminiscent of celiac disease. Celiac disease is associated with imbalances in gut bacteria that can be fully explained by the known effects of glyphosate on gut bacteria. 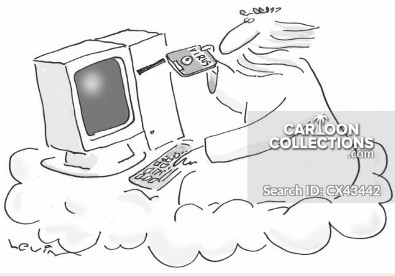 Arnie Levin drew the original, which I adapted.