7/20/2016 ~ After watching a convincing video I ordered PQQ and used it for months. It made no appreciable difference, except that it made me think I didn’t have to use Astaxanthin if I was using this “new age” antioxidant. But, not using Astaxanthin left me open to sunburn.

When I found no health improvement after I’d used PQQ for a significant period of time, I began to look more critically at the information related to PQQ, as for instance the foods containing it. It seems that all the articles talking about the foods containing PQQ come from one study. Apparently newer studies were not carried out.

I’m not buying more. When what I have runs out I don’t think I’ll miss PQQ. 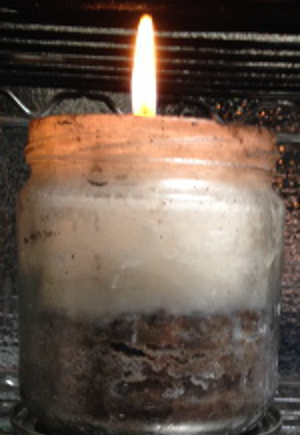 To appreciate PQQ you first need to appreciate oxidation. For instance, when I burn one of the candles I make to cook or to heat my home, I’m using rapid oxidation. In contrast, slow oxidation is rusting. You may have heard the brown on aging iceberg lettuce called rust.

As amazed as I was as a kid to learn that rusting is a form of fire, I’m dismayed now to learn that oxidation in my body, aside from the good kind involved in digesting my food, is aging me.

How does oxidation age us? 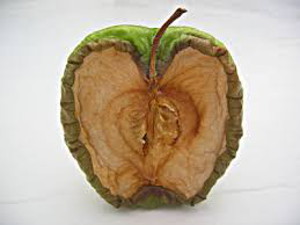 Think of what happens when you cut an apple in two. Within hours the apple begins to lose its attractive looks. I saw a video of an apple happily intact for 6 months, but then someone made a pinhole in the skin and Wham! it turned brown with rot in just a couple days. That pinhole let oxygen in and with that, rot got fired up, so to speak.

Until I began reading about “next generation” anti-oxidants, I hadn’t put rot, rust and oxygen’s effect on my body together. Sure, I knew vitamin C is an anti-oxidant, and powerful. Plus, when I read about Astaxanthin and tried it, I could see how well it worked. I’d known Astaxanthin was referred to as “more powerful anti-oxidant than vitamin C” but I didn’t think about those words any more than I think about “I’m fine,” when someone asks me how I am.

The other day I watched one of the most informative videos I’ve ever seen on heart health. It was long, but it was thorough. Link

A premise of the video was that a lot of commonly held heart “wisdom” accounts for more heart attacks than it prevents. If you’ve watched Forks Over Knives, you’ve already had an introduction to some of the basic ideas.

At the end of the informative video there are sales pitches for specific vitamins. I ordered the PQQ, but then so many additional ads came up that I cancelled my order and went to look for less costly places to buy PQQ.

PQQ, like Astaxanthin, is an antioxidant. Even before I finish creating this page I’m going to order Green Tea because it’s such an easy way to increase my PQQ intake.

3/25/2016 ~ I’m not sure it was the PQQ keeping me awake the nights I took it before going to bed, but something kept me awake. Now I’m taking it when I wake up, before I feed the goldfish and do other tasks that take about an hour.

I think it’s too early to report on how it’s helping (or not) my health.

I will say that the green tea I ordered from Republic of Tea is disappointing. It is very weak. I’m going to try brewing it a different way, to see if that helps. Otherwise I’ll have to order something better.

PQQ in Foods and Beverages

A nanogram is one billionth of a gram.