6/26/2020 ~ The picture above shows ridges on my bending fingernail at left and on my splitting nail in the middle. Ridges, bending, and splitting can be related.

Sadly, the camera angle that shows texture doesn’t show color equally well. If it did, you would see that the split is at the end of a red/taupe streak and ridge. Also, neither picture shows that the split is a bit ragged, so that it catches on fabric. 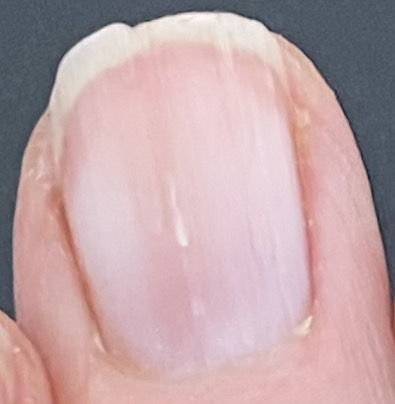 I’ve had ridges and red/taupe streaks for years, with varying degrees of severity, but splitting is recent and coincides with worsening heart/lung problems.

In terms of context, bending fingernails, ones that grow downward over the tip of your finger, have been associated with heart/lung problems for centuries, ever since Hippocrates, in fact.

Recently, in 2019, there was a sewer backup in my apartment that left me with increased breathing and equilibrium difficulties. At the same time my fingernail ridges became more pronounced as did the bending of my fingernails.

To understand the split

It helps to know that a fingernail ridge over a red streak is thinner than the rest of the nail due to vascular swelling from abnormal red blood cells pushing up against the nail.

Abnormal red blood cells generally come about when vitamin B12 levels are so low that red blood cells can’t properly divide. Instead, they grow so large they have to squeeze through the tiniest of the capillaries… if they can get through at all.

The result is ridges with red/taupe streaks beneath them, as well as numb, tingling fingers and hands for want of oxygen.

Although I have a history of ridges, splitting has not happened often, and as far as I can remember it’s never been this bad before, with new splits happening every few days.

6/27/2020 ~ I failed to record when the splitting began, so I don’t know if changes in my diet played  a part. They certainly may have.

For one thing, I was using a huge amount of vitamin C to combat the rash, redness, swelling, and itching that began after a sewer backup was bubbling under my kitchen sink and splashing for 6 weeks before anything was done. 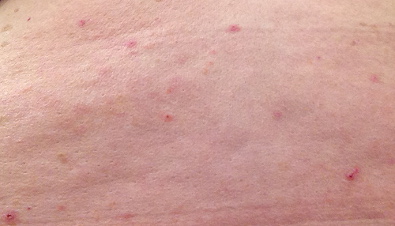 Above: Rash after sewer backup. Below: Red swelling

I used so much Vitamin C that it caused diarrhea. So, I’d stop using vitamin C for a few days, the diarrhea would go away, but then the itching would return with a vengeance. It took forever to make the rash, redness and swelling go away.

The cataracts were less rapid to react, most likely because cataract cloudiness is from relatively hard plaque. Right now I have cloudy vision that I didn’t have when I was using daily, small doses of vitamin C. Eventually a friend in Scotland suggested putting a drop of raw honey in my eyes each day. Surprisingly, it helps, but has not totally removed the cataracts.

The dental infection’s complete subsidence from using vitamin C, vs. the less complete cataract reaction has given me insight into vitamin C and, surprisingly, into good bacteria.

You see, by chance I happened upon an interview with Dr. Gundry talking about the gut lining and how good bacteria like Akkermansia muciniphilia protect it, and us. I thought if I ordered his formula, I’d get Akkermansi, but no.

To expand my understanding I read about different bacteria, vitamin B12, and immunity. From there I began eating yogurt every day, to put colonies of good bacteria in my gut.

I’m loath to think yogurt is related to the splitting. Yet, I think it is, in a roundabout way.

You see, at the very bottom of my worst bending fingernail the ridges appear to be going away, which would be good. Plus, I don’t have to stop what I’m doing as often to breathe, and, there are no dental infection symptoms.

The improvements which I attribute to the work of the good bacteria in yogurt made large doses of vitamin C seem unnecessary, so I stopped using them and rejoiced that I was no longer risking diarrhea.

Happiness! Until, that is, I noticed that my cataracts were having a relapse.

Apparently I need to keep using the amount of vitamin C it takes to keep cataracts from impairing my vision. (A word of warning, don’t look at very bright lights, that’s what caused my cataracts.)

It appears that a certain amount of vitamin C is necessary to avoid red streaks, as well.

Early on, when I had red streaks and Tetanus, vitamin C got rid of the red streaks which I understood to be from infection, rather than enlarged red blood cells from inadequate levels of vitamin B12.

6/29/2020 ~ I’m curious to see if the next weeks prove that using two grams of vitamin C a day and regularly eating yogurt cures my bending fingernails from COPD (heart/lung problems) and my splitting nails.

11/22/2020 ~ My nails are still splitting, making me wonder if the culprit is my vegetarian diet. I eat almost no meat. In the past I generally ate chicken at least a few times a month. So. I’ve ordered canned chicken breast and am going to start having that with brown rice a few times a week. I’m hopeful.

Stress, when it’s intense and I’m being threatened (property management has been pretty unfriendly) makes my legs collapse. I’d fall time and again were it not for my walker. It’s scary, so I avoid walking. Without any exercise, my heart has to work harder. I’m not exactly sure of the connection, but for sure it exists.

On the other hand, I’m happy to report the nail splitting has gone almost completely away, Which I’m thinking is thanks to eating chicken regularly.

I’ve just had a week without my legs collapsing, so I’ve been walking more in my apartment. I’m hoping this keeps up and I see changes in my bending nails.