This morning I received a worrying and somewhat bewildering email comment on my page, B12 Malabsorption.

Is this junk science??? Red Blood Cells do not divide… they are formed in the “marrow” of long bones. Because of the lack of nuclei and organelles, mature red blood cells do not contain DNA and cannot synthesize any RNA, and consequently cannot divide and have limited repair capabilities.

If you get such basic science wrong then is the rest of the article any more accurate?

That made me wonder if somehow I’d gotten it all wrong. 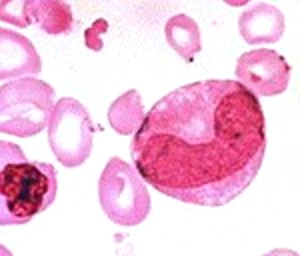 Megaloblastic anemia is in fact the condition when red blood cells are too large, having failed to divide properly. Per the above quote it appears that a red blood cell is “nucleated”, meaning it has a nucleus, prior to being “mature”.

“Exactly” is the operative word. Basically, it was known that as a mammalian red blood cell nears maturity, a ring of actin filaments contracts and pinches off a segment of the cell that contains the nucleus. As this occurs in red blood cells, macrophages come along and swallow up the discarded nuclei.

Researcher, Harvey Lodish, a professor of biology at Massachusetts Institute of Technology, wrote,

“Using a cell-culture system we were actually able to watch the cells divide, go through hemoglobin synthesis and then lose their nuclei… We discovered that the proteins Rac 1, Rac 2 and mDia2 are involved in building the ring of actin filaments.”

So, it turns out that red blood cells divide four or five times before losing their nuclei.

How a red blood cell loses its nucleus ~ Read article.

I’m grateful to Ozzyguy011 for raising his question regarding mature red blood cells no longer having nuclei and no longer dividing. I’m delighted to be able to send him this web page and reply, “No, it is not junk science. You need to read a little more thoroughly in order to understand what is basically going on. But, thank you for writing.”