Well, two health related things in my life are like that: You “turn on” to them and it’s like light flooding a room.

I suppose now that I’ve said, “turn on”, there’s an expectation that one of the things is grass, to put marijuana in the vernacular.

Possibly I should have said three health related things. In any case, the other two are vitamin B12 and astaxanthin (pronounced Asta-xan-thin).

In addition to frozen mobility, there was a terrible grinding noise in some of my joints, particularly my hips, and pain. Now, because the noise is long since gone, I no longer remember which hip was loudest.

On health forums I read accounts by people who had pain and the grinding noise and in a few years had to have hip surgery. I’m on my own, so hip surgery sounded worrying on so many levels.

Next, I went to a popular vitamin site and searched, “hip pain”. The result was several reviews of astaxanthin. That was the first time I heard of it. The most surprising reviews said that astaxanthin prevented sunburn as well as pain. “Oh right,” I thought, totally skeptical.

However, the noise, stiffness and pain in and around my joints made me think I should buy some and give it a try.

At the time I was trying things that promised relief from the massive pain I had, and I was keeping notes because I was doing a web page on pain. Thus, I have my notes which show astaxanthin quickly began working.

3/9/2011 – Stress set me back. IRS claims I made nearly $500,000 in 2006, which is false and meant to put me under duress. I actually made about $8,000. But, New Mexico Tax and Rev bought into the lie, so now I get threatening calls from Tax and Rev and scam calls about help. Saturday night I didn’t sleep well, Sunday I had more pain, then I slept sitting up to reduce pressure on my hips, which tend to start hurting during the night. That made my back hurt. What a litany. In any case, the Astaxanthin I ordered to help me with the hip pain just arrived, and I’m making this note so that I can report on how much it helps… or doesn’t… with accuracy in terms of when I started using it.

3/22/2011 – The Astaxanthin has made the grinding noise from my hip less loud, but I’m still having difficulty walking despite buying a wonderful Rolling Walker. So, I’ve ordered Glucosamine- Chondroitin to see if that helps my hips and knees.

It worries me that I’ve used Ibuprofen since October, when I know that Ibuprofen is bad for the jaw bone and weakens it. I’m concerned that the Ibuprofen is also affecting my hips, since before now they never made a grinding noise when I got up.

4/2/2011 – Reporting on the Astaxanthin: I’ve used it for three weeks. The Astaxanthin has decreased the grinding noise my left hip made when I got up, and, when I was taking less during the last couple days of the test period I had more pain in my legs.

And, per the claim Astaxanthin works as a sun screen, I haven’t gotten a sunburn even though I’ve been sitting in the sun most days. Most years I get a bit of a burn, despite being careful not to stay in the sun too long. I’m going to continue using the Astaxanthin.

I just found a beautiful video of an algae cell filling with astaxanthin.

10/22/2016 ~ I recently had proof that Astaxanthin prevents sunburn. Although I’ve been sure for a couple years that the reason I haven’t gotten a sunburn, even in the spring when the sun lures me into its warmth for extended periods of time, my recent experience confirms the efficacy of Astaxanthin.

What happened is that I ordered a three pack of Hawaiian Astaxanthin from Amazon because there was a significant savings. When my order arrived, the Astaxanthin soft gels were clumped together at the bottom of the bottles, as if they’d gotten too hot, and fused.

I thought they might be okay, so I began using them. About three weeks later, I got a sunburn. Amazon kindly refunded my money and I sent what was left back and ordered a single bottle.

I’m guessing I need to use the good Astaxanthin for three weeks to build up the same resistance to sunburn that I previously had. I’m almost there, but not quite judging from this morning when I was enjoying the sun until it suddenly began to feel hot in the way it does when it first begins to burn.

When my first order of Astaxanthin arrived I began taking it every morning. Then, after I learned it’s best absorbed when taken with fats, since it’s fat soluble, I took it with a Flaxseed Oil softgel in the morning, and took another with eggs scrambled in olive oil in the evening. I was using eggs to combat extreme sleeplessness at the time. (I also began using Glucosamine Chondroitin with MSM. One 4 capsule dose in the morning, another in the evening.) Eggs, Tryptophan and Sleep ~ Read more.

In a week Astaxanthin made a difference. I’m hopeful that improvement continues till I’m pain free and able to walk without my rolling walker.

Astaxanthin is known to reduce inflammation, to be a high powered antioxidant and to kill h.pylori, the bacteria that can affect your stomach lining making it almost impossible for you to absorb vitamin B12 and magnesium from food. As an aside, h.pylori is known to cause ulcers of the kind that lead to stomach cancer.

Astaxanthin provides natural sun protection which means you’ll be able to get natural vitamin D while you use Astaxanthin, which is far different from using sun screens. I haven’t had a sunburn since I began using Astaxanthin. Previously I always got sunburned when the weather invited me to stay out in the sunshine I’d missed all winter.

How is big Pharma using astaxanthin?

It’s interesting to read pharmaceutical patents which show clear recognition of the potency of Astaxanthin. Here’s a list of some of the uses Big Pharma is making of it: 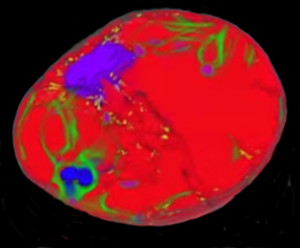 Article Name
Astaxanthin Health Benefits
Description
You know how you turn on a light bulb and there's no denying how effective it is? Well, Astaxanthin is like that in my life.
Author
Karen Kline
Publisher Name
Health Boundaries
Publisher Logo