6/14/2017 ~ My interest in Maca was renewed this morning when I saw a pinned article about Adaptogens, herbs used to support the adrenal glands. The article explained, “Adaptogens are like a GPS system that figures out where you are and helps you get where you need to go.” The underlying theme was, “bouncing back from stressful experiences.”

Bouncing back is on my mind. The trial in Wells Fargo’s fraudulent foreclosure action on my home and garden was a few weeks ago. Each day I came home exhausted and crashed around 9 p.m. Ordinarily I go to sleep around midnight. I thought that after the trial was over and all that was left to do was wait for my lawyer to submit the findings of fact and conclusions of law to the judge, that I would bounce back. But, no. Hence, my renewed interest in Maca, but now as an Adaptogen.

According to the article there are several safety classes of adaptogens, with Class 1A being those with the most established safety record. Maca is in Class 1A. Read more.

Maca, a member of the broccoli family, comes from high in the Andes Mountains of Peru. It grows in the intense sunlight there despite violent winds and seasonal below-freezing weather. Could it be that Maca is an adaptogen exactly because over the centuries it came to flourish in these harsh conditions? making the most of the world’s worst farmland?

In any case, when the Inca became aware of Maca they domesticated it with the result that Maca is found in archaeological sites dating back to 1600 B.C.

I hadn’t heard of Maca

1/15/2014 ~ I first heard of Maca when I was looking for an organic replacement for my powdered, GMO laden, coffee creamer. One of the early organic coffee creamer recipes I found included Maca, which was touted as a superfood. I ordered it because I love coffee with creamer. I didn’t know what “superfood” meant.

Months later I ran into Maca again when I wanted to get more potassium into my daily diet because I was having muscles spasms from long use of large amounts of Methylcobalamin B12, which was helping my blood cells return to normal behavior, with the downside that my body wasn’t prepared for a much higher need for potassium, thus causing me painful, VERY painful, muscle spasms.

I ordered potassium supplements before I learned that I need 4,700 mg of potassium a day, and that’s before my increased need. The supplements provid 98mg. BIG difference. So, where to get the potassium I need, especially since I can’t pop out to the grocery for bananas. (I used to say I’m housebound, now I think of myself as a hermit.)

Googling for sources of potassium turned up Maca which is reported on one site to be 40% potassium. That caught my attention. (Other websites, however, varied with 2% being the lowest.) 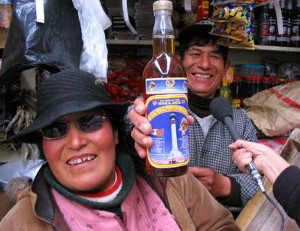 Overall, Maca has over 60 different phytonutrients. “Phytonutrients” is Greek for plant nutrients, that is, the beneficial chemicals in plants that keep them healthy, and so too us when we eat them. (One of the big controversies regarding American grown food is its lack of nutritional value due to genetic engineering and artificial fertilizers.)

Native Peruvians have traditionally used maca since pre-Incan times for both nutritional and medicinal purposes. They even make a liquor from Maca!

For health buffs, Maca is known as an endocrine modulator, or an endocrine adaptogen, that works on the pituitary through the hypothalamus, communicating with all the glands of internal secretion, in fact, the whole endocrine system. Keep in mind that our glands are basic to all the functions of our bodies. (As of June, 2017, I’d forgotten this bit.)

When a friend wrote, “I just tried to order Maca but there was a warning from the state of California that it contains ingredients that can cause cancer or birth defects so I decided to wait before I ordered it,” I Googled for Maca + Cancer. I found the following on the Memorial Sloan Kettering Cancer Center site:

Human trials of maca reported increased libido and improvement in sperm production and sperm motility. Maca supplementation was also shown to enhance the subjective feeling of sexual well-being and may benefit those with sexual dysfunction induced by selective-serotonin reuptake inhibitors (SSRIs). read more

WebMD does not give a warning about Maca on its site, but does give this in relation to a recommended dose:

The following doses have been studied in scientific research:

A site I found particularly interesting was Examine.com which listed many studies and their results. Visit site.

I’m reminded of how for many years I was afraid to supplement my B12, even though when I had a shot, it made me feel much better. I was afraid because several doctors said too much B12 was as bad as too little. I had no idea what they meant by “too much”, and in fact they made me beg for a monthly shot because as one said, I couldn’t be B12 deficient because I’m not a vegetarian. That view is totally in error, but I didn’t know that at the time. So it was years before I found a holistic doctor who recommended a shot a day… That changed my life.

I love the picture, above, of Maca roots amid Maca plants.

And, I love the picture of a tower in Junin, Peru that is clearly inspired by Maca roots.

First of all, I like Maca in my coffee, along with some other organic creamer type ingredients, so Maca is pivotal in my new Organic life.

Second, and maybe this should be first, since I’ve been using several teaspoonfuls of Maca in my coffee every day, I no longer have the extremely painful muscle spasms, which are what set me on the search that led to Maca in the first place.

I’m not saying that in the two months of using Maca I have totally stopped having muscle spasms, because they are not entirely gone. What is gone is the severity: there’s no more screaming bad pain.

Third, and again, maybe this should be first, I have a lot more strength, which seems to be from remedying my low potassium levels that came about when I began using a lot of Methylcobalamin to get rid of the many, serious the low vitamin B12 symptoms I had.

By “strength” I mean being able to do simple things like easily lift my feet, which was a serious problem for many months, making it extremely difficult to do minor things like go outside my front door, where there’s a very shallow step.

Because my loss of strength (to do simple things like easily lift my feet) was equally bad while I had tetanus and after I exhausted myself sweeping water out the front door keep to a broken water pipe from flooding my whole house, I thought that my lack of strength related entirely to nerves (tetanus is a central nervous system disease). Now, given my recent recovery, I see that most likely my intense sweeping out of water depleted my potassium levels, due to the extended exertion. If I had properly understood potassium sooner, I might have had a far more enjoyable year after the pipe break.

By strength, I also mean being able to do things for a longer period. My stamina, my endurance, is definitely better. So, my garden is happier, due to more tasks being completed. Etc.

Nearly all maca growing in Peru is organic. For one thing, there are few natural plant pests at the high altitudes where Maca grows.

Additionally, Maca naturally repels most root crop pests and for that reason is sometimes interplanted with potatoes by Peruvian maca farmers.

Maca croplands are fertilized mainly with sheep, alpaca and llama manure. Alpaca are smaller than llamas and were bred for their wool, rather than as pack animals.

Maca croplands are often rested for a period of years to rebuild nutrients in the soils. 8 to 10 months elapse between sowing and maturity for harvest. The yield for a cultivated hectare is approximately 5 tons. Maca is typically dried for further processing, which yields about 1.5 tons total.

For approximately 2,000 years, maca has been an important traditional food and medicinal plant in its limited growing region, where it is well-known and celebrated. It is regarded as a highly nutritious, energy-imbuing food, and as a medicine that enhances strength, endurance and also acts as an aphrodisiac.

During Spanish colonization maca was used as currency. 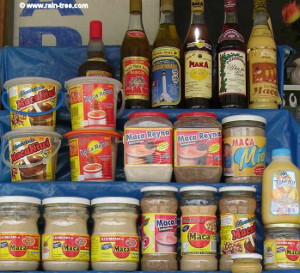 In Peru there is a wide variety of Maca products. Raintree, which no longer exists on its own and is no longer associated with selling Maca products, has wonderful images to include many of Maca being grown in Peru.

A History of Maca 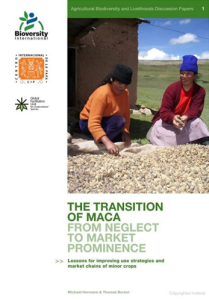 The Transition of Maca from Neglect to Market Prominence by Michael Hermann and Thomas Bernet, recounts some interesting facts. For instance, during the 19th and early 20th century there is no mention of maca cultivation in literature, which appears to be related to a decline in Peruvian highland agriculture at the same time there was expansion of wool production and mining. The first newspaper articles on Maca appeared in 1960, mentioning Maca’s positive effects on reproductive fertility.

In the next twenty years Maca was cultivated primarily for self consumption and occasional local festivals around Junin, Peru.

In the late 70s and early 80s local Peruvians began to promote Maca health benefits. For example, Timotea Cordova began to offer a Maca beverage in her shop in Junin, on the road between Lima and Huanuco, that was much appreciated by her customers. Numerous postcards were displayed giving testimony to the almost magical powers of Maca to restore marital bliss and bring desperately wanted children.

Peruvian television and newspaper coverage in the early 80s led to greater awareness of Maca and consequently the introduction of several Maca products. Soon thereafter people from other countries discovered Maca.

Peru’s president from 1998 to 2000, Alberto Fujimori, created considerable publicity for Maca in Japan. There was also increased interest in the US and Europe. As a result, Maca production expanded with the accompanying use of mineral fertilizers to increase area yields.

However, the drastic expansion led to oversupply. Many farmers were unable to pay back loans and were ruined. (Sounds like Monsanto victims today, all around the world.)

Next came processors and traders who sought to avoid taxes and registration. Products were adulterated with confusion resulting among consumers.Today Maca is labeled Organic when it has been grown without the use of pesticides. (During its early flush or popularity, Maca had become commonplace in areas less harsh than Junin where insects attacked it and pesticides were then used.) Full pdf version.

Image of Inca Farmer with Llama courtesy of Arvind Balaraman at FreeDigitalPhotos.net 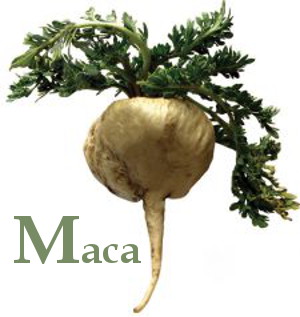 Article Name
Superfood ~ Maca
Description
Maca, a Class 1A adaptogen and "superfood", is loaded with a phytonutrients and can can richly contribute to the 4,700 mg of potassium we need a day
Author
Karen Kline
Publisher Name
Health Boundaries
Publisher Logo

Twitching eyelid and vitamin B12