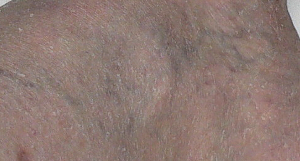 After I began taking Serrapeptase, mainly as a replacement for Ibuprofen, I had an uncomfortable feeling most of one day in my left leg, especially around the ankle.

I remembered my friend, a certified herbalist, saying that Serrapeptase is effective for swelling and pain and that it clears clogged arteries, so I wondered if Serrapeptase was working on veins in my leg.

I took a photo, wondering if somehow the uncomfortable feeling was in fact serrapeptase working on veins. About two weeks later I took another photo. Look at the two photos and see what you think.

I took the pictures above at different times of day, so the light in them is different. I tried to crop the two images to be about the same ~but my foot’s angle is different in each shot.

August 10, 2006 — When I look at my ankle I am sure that the veins are much less noticeable. In the picture, though, they are only a little more faint. I wish I hadn’t flexed my foot and made the wrinkles.

Serrapeptase working on veins – one month

The thing is, Maggie wrote that it would take 18 months to clear clogged arteries completely. So I’m not sure how much difference I can expect in one month with my varicose veins.

When my mother was 20 years younger than I am now, her varicose veins stood out like knots all over her legs. She was diagnosed with pernicious anemia decades later. I don’t know if there is a connection, but if low B12 makes the blood cells larger, then… doesn’t it seem as if it would cause the veins to stand out?