Forks Over Knives is indispensable watching.

Until you watch this film you will not understand how coronary heart disease works, and how it can be stopped without using an expensive prescription, i.e. pay a farmer not pharma.

Forks Over Knives shows that a plant based diet can reverse heart disease, diabetes, even cancer. I had no idea by-pass surgery costs $100,000, or did when this film was made. It’s likely more now.

Nor had I any idea how many people have by-pass surgery every year. It’s a multi-billion dollar industry. No wonder people involved in the industry continue to purport that animal protein is necessary for health. What they fail to say is, that’s Ill Health.

A man in the film had 5 by-pass surgeries. But, within a week he was having chest tightness again. After he met with one of the doctors in the film, he changed his diet to plant based foods. Changing his diet changed his health. A woman in the same doctor’s study was given 6 months to live. She entered the study, changed her diet and was there for the full 12 years of the study.

Our veins are lined with endothelial cells. Our endothelial cells are the biological mechanism that protects our blood vessels and in turn protects us from coronary heart disease. These cells emit nitric oxide, a gas that keeps our blood flowing smoothly. Nitric oxide also helps dilate our blood vessels during physical activity. But, most importantly, nitric acid inhibits the formation of plaque and the inflammation that goes with plaque.

When we eat foods, fast or otherwise, which are high in fat, animal protein and sugar, the endothelial cells become damaged and no longer emit sufficient gas to keep our blood flowing smoothly. Plaque begins adhering to the walls of our blood vessels, inflammation begins to push up and dislodge endothelial cells, more plaque forms and by-pass surgery happily adds to the industry’s bottom line. 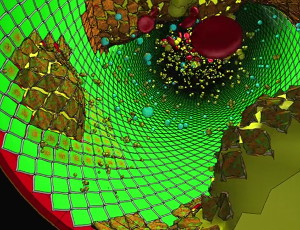 The startling thing is that even the most damaged and clogged veins begin to heal when their owner replaces meat and dairy protein with vegetable protein. Even Lipitor cannot compete with a plant based diet. Lipitor does not reverse damage the way that a plant based diet does.

As I watched this film I thought about my favorite aunt whose husband was an excellent earner so that they were much better off than the rest of us. Going to their house for a meal was such a treat. There’d be thick and beautiful pork chops, or some other extraordinary, lavish meat. I thought about how when I lived in London I couldn’t afford meat. I made plant based meals, not out of concern for the health, but out of poverty. Today, I’m 73. My favorite aunt died many decades ago when she was still young, and her husband died a few years later.

It seems as if people would want to spend their money on good, healthy food, rather than prescriptions, but maybe we are a lonely people here in the United States, and we’d rather pay to visit with a doctor and get prescriptions than have no one who appears to care for us.

Many celebrities have recently decided to switch to a vegan diet, citing that documentary Forks Over Knives inspired them to do so. The documentary looks at the many diseases that can easily be treated by removing animal products from the diet. A few celebrities who went vegan after watching Forks Over Knives: Eliza Dushku, Jason Mraz, Kristen Bell, and Russell Brand.

It’s not a free movie, but it’s worth every penny. After you watch this film you are going to think differently than you ever did before about much of the nutrition advice we’ve relied on for decades.