I have IRS to thank for most of what I know about stress damaging nerves. IRS put me out of business when they enforced for 1984, taking two entire commissions in a row, leaving me penniless, despite the fact I’d paid my 1984 taxes in 1985.

IRS caused foreclosures and in fact the Wells Fargo foreclosure now stems from IRS putting me out of business and so thoroughly robbing me of my health that I couldn’t make the kind of money I had previously made as a self employed Realtor. Plus, by putting me out of business when it did, IRS reduced my social security because I was short two quarters to have had nearly twice as much social security income now in my old age.

It’s lucky that US News & World Report used my experience in the 1996 piece they ran on IRS abuse of taxpayers. Otherwise I doubt people would believe that IRS put me out of business enforcing for a year I’d paid. The piece follows.

Don Boroughs, a U.S. News & World Report senior editor and an author of this piece, interviewed me by phone. When he asked me how old I was, I said I didn’t know, but I was born December 2, 1944… so he figured it out and led with my age.

“She was the unlikeliest of tax protesters: a 52-year old product of Catholic schools, a moderate Republican who crossed party lines to vote for Bill Clinton, a real estate agent in New Mexico who wasn’t even aware that antitax rebels existed until a couple of years ago. But when Karen Kline filed and paid her federal taxes for 1984 — a year in which she earned less than $11,000 — she triggered an endless series of oversights and corrections, payments and credits. Last April, instead of sending a 1040, Kline mailed the IRS a bitter letter, accusing the agency of destroying her business, treating her like a criminal and jeopardizing her health. The IRS now admits its mistake: All Kline really owed for 1bl984 was a late filing penalty of $86.”

I think Don Boroughs was particularly aware of my Catholic education because I sent him a letter describing a leak under my slab as Miraculous. Letter to Don Boroughs ~ Read more.

Tax collectors have been dodging stones ever since biblical times; indeed, the history of the nation begins with a tax revolt. But the chorus of voices challenging the IRS today is rising to a pitch not heard in decades. Unlike the 1980s, when tax rates were the issue, the entire existence of the current tax collection system is undergoing tenacious scrutiny in Washington. Bill Archer, chairman of the tax-writing House Ways and Means Committee, pledges to “remove the IRS totally and completely from every American’s individual life.” And n a poll by the Tarrance Group for the U.S. News, fewer than a quarter of registered voters said that the country would be worse off in the IRS were abolished; more than a third thought the agency’s demise would be an improvement, while the rest were neutral or undecided. “There is a rebellion against the IRS going on that is just astonishing,” observes House Speaker Newt Gingrich. “The hostility is unbelievable.” Adds House Majority Leader Richard Armey: “The resentment is very big and very real.”

I had written to Bill Archer about IRS behavior adversely affecting Americans, and because I mentioned a friend of his who had sold a home here in Santa Fe using me as his Realtor, Representative Archer actually wrote back to me. Most of the things on the first two pages, below, are things I talked about to Mr. Boroughs.

Targets. IRS revenue officer Susan Ryan of Austin, Texas, feels the anger bearing down on her from all sides. Last fall federal authorities charged and anti-IRS car salesman with plotting to blow up the agency’s Austin Service Center. “We’re being targeted,” frets Ryan, “and I think everyone else in the IRS thinks we’re being targeted.” The tax-man-be-damned attitude has made this the worst time in memory for IRS employees who have to deal with the public, adds Robert Tobias, president of the National Treasury Employees Union, which represents IRS workers. The agency’s front-line troops, notes Tobias, are encountering “more hostility, more resistance and less cooperation.” Indeed, IRS employees have received an average of 718 threats of violence annually in the 1990s. As a result, many agency workers now keep their home phone numbers unlisted, and some even use pseudonyms on the job. Most frightening was the 100 pound fertilizer bomb that came just one spark short of blowign up a Reno, Nev. IRS building in December. A disgruntled taxpayer has pleaded guilty to planting the device in the building’s parking lot and has agreed to testify against a co-worker. Meanwhile, last week, in a tense standoff in Montana, law enforcement officials surrounded an armed band of radical tax protesters wanted on bank fraud charges.

My cousin, Bill Golomski, who was a statistician and had a publication on Quality, told me about the IRS doing so poorly in customer satisfaction. 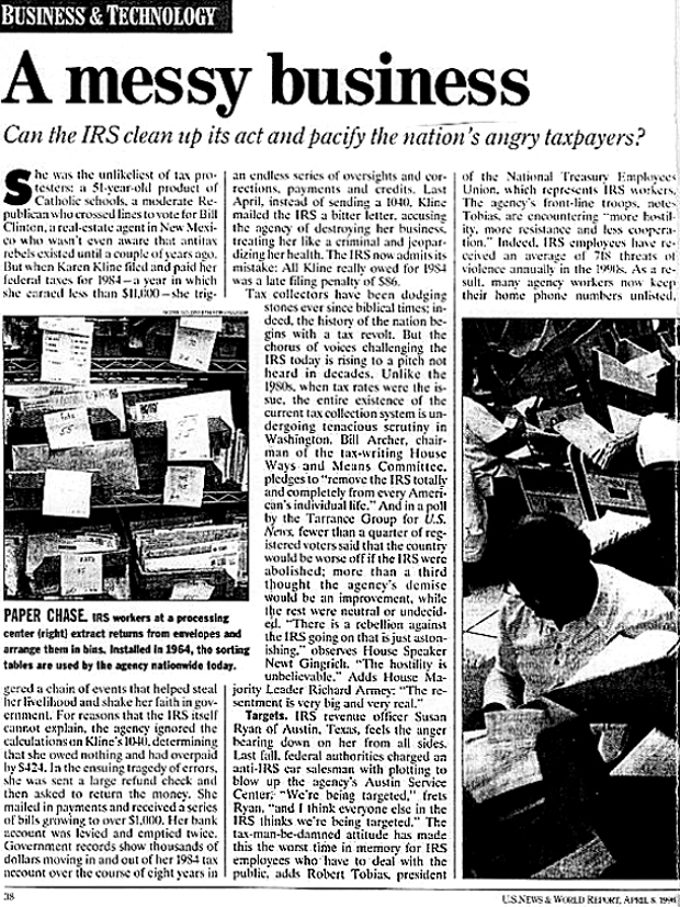 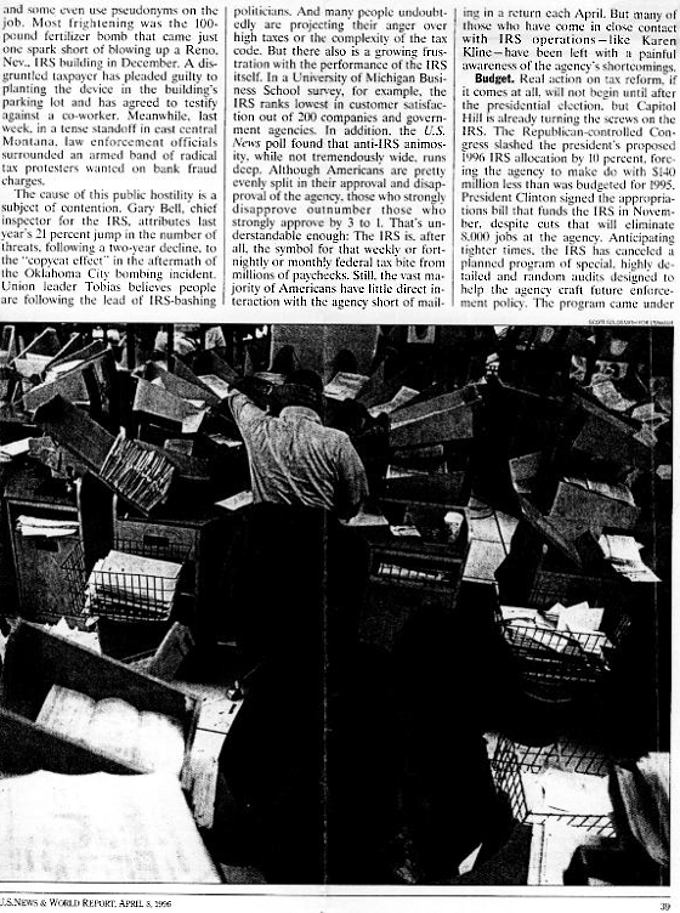