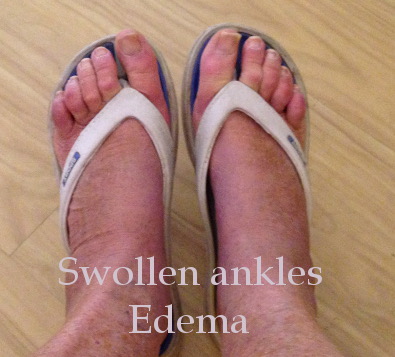 I didn’t have swollen ankles until I was given a medication that you’re not supposed to give people with heart problems. The health care professional in charge refused to listen to me.

My ankles reacted by getting three times more swollen than the one on the right, above. Even putting my feet up against a wall so they were well above my head, the swelling refused to go down for nearly a week, despite not taking the medication any more.

In the two years since then my ankles have become really swollen like that a few times. I wasn’t taking the medication, so the swelling scared me. Especially since almost invariably my feet and legs became so uncomfortable during the night that they woke me.

I wondered if maybe, after all, it wasn’t my heart that was the problem, but my weight. So a few months ago, prompted by being winded from very little activity, I decided to try using Spirulina for its iodine content to see if that helped me lose weight at cell level, via my thyroid gland. Basically, our thyroid gland uses iodine in making hormones that activate, among other things, our metabolism, and there’s not enough iodine in iodized salt.

When not much happened over a week or two, I decided to speed up my metabolism with a bit of morning work out, not just the iodine.

I use the term “work out” rather loosely. To be precise, I’m not very well. I began hunching over my walker as I walked so that when my legs gave out, which they were doing a lot from stress, I would collapse onto the walker, rather than “falling” a foot or two and tipping it. I was six feet tall before the hunching.

What I mean by “work out” is doing a sort of bouncy two step to You Can Call Me Al, for less than a minute and a half… I’m up to two and a half minutes at this point.

The first two days I did it, this is just before coffee in the morning… while waiting for my coffee to finish perking… I felt decidedly different, sort of as if I’d opened windows in my body, the way one opens windows in a house and fresh air blows through.

On the third day the bones in my ankles began to make an appearance, but very faintly. As soon as I saw that, I realized that my ankles had been swollen, just not hugely swollen.

People usually talk about exercise  in amounts that are totally unrealistic for people with illnesses or disabilities that restrict physical activity. It’s discouraging. Especially since the truth is that very short periods of exercise make a noticeable difference.

Here’s a video of short exercises that I found on Pinterest. It’s great:

2/9/2021 ~ My computer has been making it hard to type because my cursor jumps around — suddenly I’ll be typing in a completely different paragraph. This is not new. In fact, before Christmas I ordered a new computer, but it didn’t work for me, and the next computer kept unexpectedly opening pages, so here I am with a troublesome computer that has started doing the dreaded blue screen.

Interestingly, yesterday I began worrying whether this computer would make it to March 4, when my new computer, which should be good, is supposed to arrive.

4:30 this a.m. I woke and could not go back to sleep. When gave up trying and got up, low and behold, my left ankle was major swollen. (If my skin wasn’t so dry and scaly right now, I’d have taken a picture.)

About an hour and a half after my morning work out, the swelling was less intense.

I can’t help but conclude the swelling was from stress. Somehow stress changes something in my body and causes swelling at my ankles.

I know for a fact when I play those old fashioned computer games like Bejeweled Twist, or Plants vs. Zombies, my left hand becomes so numb it’s hard to use. If I stop and relax, the feeling comes back. So, I strive at remaining relaxed while I play, but haven’t mastered it.

My feeling is that I get physically tense from stress because my body releases something that causes the tensing. When I do the energetic dance something is released that washes the bad/stress thing away. (I could go look for research to back my theory up, but… blue screens and all.)

Without research I know magnesium in an Epsom salts soak washes away swelling. I know that from when I lived in the hydrogen sulfide from the outdoor toilet pit that was under my bedroom, unbeknownst to me. When I moved to a motel while the pit was being excavated, my ankles were nearly the size of my thighs. It was amazing to take a bath in Epsom salts and see how greatly it reduced the swelling.

I hadn’t expected to include stress in this blog about edema and swelling, but stress made its involvement too noticeable to ignore.