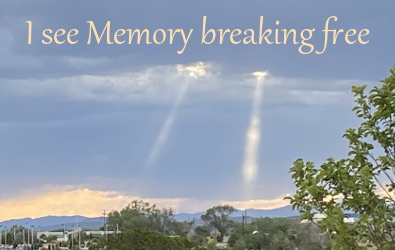 11/17/2020 ~ The other day I saw two shafts of sunlight coming through heavy, dark clouds as if they’d found keyholes. I was amazed at how real the light looked, almost as if it were solid.

Most days, here in New Mexico, there’s sunlight everywhere, which surprisingly enough makes it almost invisible. I simply don’t see it when I look out the window. I see its effect, a brightness, but not the light itself.

It struck me that in a way, it was very similar to memory. When my memory was unaffected by vitamin B12 deficiency, or a brain injury, it just worked. I didn’t think about it, it was just always there, providing nearly instant recall. Life was bright.

But, there came a time when a dark tunnel seemed to attach itself to me and follow me around. Every time I took a step, the darkness hungrily bit off the moment I’d just left. I didn’t have it any more. The darkness was eating my life, second by second, leaving me in a void, without memories. It scared me, as if at any step I could fall backward into oblivion.

From a task oriented viewpoint, I couldn’t want coffee and get to the kitchen fast enough to remember why I was there.

Perhaps because it was disorienting to never quite be able to remember what I was doing, my activity level diminished, and with it more of my remaining memory.

It’s surprising how things work though. You know that story of the ring that was lost in a canal, dearly missed, then found in a fish being cut open and cleaned before cooking? In terms of my memory, the story isn’t that far fetched.

There was luck in the fact I wanted to tell people how I’d been suicidal when my vitamin B12 level had dropped.

It was lucky that wanting to tell was stronger than wanting coffee, even though I love coffee and coffee is an integral part of each day for me.

The wanting to tell was so strong that it must have nicked a hole in the darkness that was following me around, eating my life, a hole like that hole in the dark clouds where sunlight streamed through.

The strength of my wanting was the first memory. It refused to be dimmed. Even if I closed my eyes, it held its own.

It was a small thing, though, not a suddenly bright sunny day of all recovered memory.

But, it’s where more recovery began. If I just stayed focused I could tell people. Staying focused was like grabbing onto that shaft of light.

Wanting kept me focused, seconds at a time. Each second was a victory against the consuming darkness.

My muscles responded eagerly to nudging from my awakening nerves. I got up from my chair more often, I walked in my garden, did a few exercises, and made sure to use vitamin B12 lozenges, methylcobalamin lozenges.

Here’s the zinger: You can regain your memory if you just make a nick in the horrible darkness of forgetting. The question is, what do you want even more than coffee? It could be a new reel for your fishing rod, or a blouse you want to order and wear when you see someone. Wanting is a powerful thing, not greedy wanting, but healthy wanting.

What do you want, more than coffee?