9/8/2018 ~ A fingernail beginning to bend over the tip of your finger can be a life saving warning. That is, if you take the bending fingernail to heart and work to reduce the underlying problems.

The bending fingernail in the photo is not pronounced, but you can see how different the tip of that fingernail is, in contrast to the fingernail on my little finger, next to it.

When I first saw my bending fingernail, a month before the picture was taken, I thought I must have hit it on something. When I clipped it off and it grew back, I began to realize it’s an early warning of lung and heart disease, per Hippocrates. 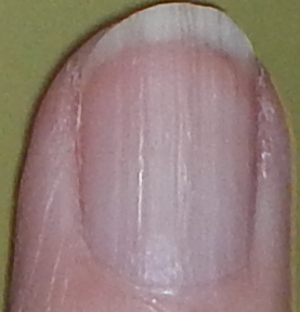 10/11/2018 ~ Update ~ It’s a month since I began drinking Red Panax Ginseng first thing in the morning, and taking Korean Ginseng later in the day. The ridges on either side of the bend in my fingernail have smoothed as new fingernail grows, though it could be light at the bottom of my nail making it look that way. But, I’m not getting winded as easily. I’m also not as tired all the time. The bend at the top of my nail is still there. I hope it goes away when the changes at the bottom of my nail grow out all the way to the top.

In 400 B.C.E. Hippocrates, father of clinical medicine, identified clubbing, where a fingernail bends over, as a sign of lung and heart disease.

“All sufferers from empyema may be distinguished by the following symptoms . . . the fingernails are bent and the fingers grow hot, especially at the tips.” (Prognostics XVII).10,12

Empyema is an unfamiliar word for me even though it’s still used today to refer to “inflammatory fluid and debris” in the pleural space/cavity. 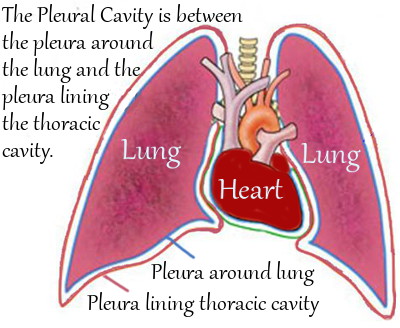 Basically, there are two layers of pleura, one surrounds each lung, and the other lines the inside of the cavity where each lung is located. Between the two layers is the pleural cavity.

If an infection causes the pleura to become inflamed then each time you take a breath the pleura rub together, painfully. The medical term for this is pleurisy. Pneumonia and flu are two causes of inflamed pleura.

But, I don’t think that’s what Hippocrates was talking about. So, I looked for another translation from the Greek and found this,

XVII. All sufferers from empyema may be distinguished by the following symptoms. In the first place the fever never stops, being slight during the day but more severe at night; copious sweats occur; the patient has a desire to cough, without bringing up any sputum worth speaking of; the eyes become sunken; the cheeks are flushed; the finger-nails are bent and the fingers grow hot, especially at the tips; the feet swell up; blisters rise about the body, and the appetite fails. LOEB CLASSICAL LIBRARY Vol 2 translated by John Redman Coxe

I also found a definition of the Greek word from which “empyema” derives,

Empyema is a condition in which pus and fluid from infected tissue collects in a body cavity. The name comes from the Greek word empyein meaning pus-producing (suppurate).

I have long seen that ridges on fingernails correspond to blood related issues. For instance when I had splinter hemorrhages, that is, bright red lines under my fingernails, the lines always corresponded with ridges. As you can see, the bend in my bending fingernail is between two distinct ridges.

In the three months since my friend took the original pictures on June 15, 2018, after taking me to file things at the Appeals Court in the hope of saving my home and garden from Wells Fargo, the bending fingernail has not stopped bending. I have cut my fingernails many times, but still the bending is there.

Around August 30th, (2018) I was keenly aware of my bending fingernail because taking just a few steps caused me to be out of breath. I was so tired, I felt exhausted shortly after I woke up in the morning. I felt sick. My forehead was hot to the touch. It was hard to breathe. My hand would freeze so I couldn’t move it. Only when I made myself relax could I regain control. Then, my lower jaw began feeling paralyzed. At other times it would suddenly become extremely painful. During the night, the pain would hit and wake me up. I felt as if the stress of fighting Wells Fargo was causing my days to be numbered.

I was in bed, enduring it all, when Pinterest sent me a pin about signs you could be close to having a heart attack. One of the signs was extreme jaw pain or back pain.

When I began tweeting about my difficulty breathing and how sick I felt a woman responded saying that lung issues are serious. She sent me a Direct Message saying that she has COPD, Chronic Obstructive Pulmonary Disease, and, “Stress plays havoc on the lungs & the more you struggle to breath, the harder on the heart.”

I asked if her fingernails were bending. She said, “As to finger nails, a definite sign is they curl under.”

She said her COPD is from smoking. I replied that my lung problems may be from having lived across the street from a business that put out big, bright pink bags labeled, DANGER ASBESTOS WASTE, and from living in hydrogen sulfide for a number of years, not to mention having had pneumonia several times when I was young.

In COPD excessive mucus collects in the bronchioles. This is most likely what Hippocrates was referring to in his writing about empyema. Even today empyema is defined as the collecting of “pus and fluid from infected tissue.”

Since I had the bending fingernail for months before I became so sick, I felt as if I had either been mortally affected by the intense, recent stress related to Wells Fargo scheduling a foreclosure sale of my home even though the foreclosure judgment is in the Court of Appeals, or the stress had made me much worse but wasn’t going to be fatal if I could figure out what to do.

When I googled alternative approaches re lungs, there were many almost identical pages telling me to use herbs that act as expectorants, that is, herbs that cause the formation of sputum, herbs that break up chest congestion, herbs to help me relax, herbs that kill the vicious little organisms that are causing the problem, etc.

Chaparral was suggested on several sites. It’s basically the creosote plant. I “know” it because I once shared my home with a young woman who was major tuned in to herbs, crystals, I can’t list all the things she was tuned in to, there were so many. We had lots of visitors and she often made Eyebright tea. One day it fell to me to make tea for the visitors, one of whom said he was the man after whom Milo Minderbinder had been patterned in Catch-22. From the things he was saying, that seemed as if it could be true.

I didn’t want to copy Bonny, my almost universally informed housemate, so when I went to our pantry, with every conceivable herb tea, I chose one I didn’t remember her ever having served, creosote. LOL. I mean, seriously, laughing out loud now that it’s so many years ago and the embarrassment has subsided. Creosote, like that slathered on telephone poles to protect them from … who knows what. It’s not a lovely flavor like Eyebright, to say the least. I don’t think anyone took a second swallow from their cup of tea.

Based on that memory, while I was impressed that decades ago I’d inadvertently chosen a horrid tasting tea that happened to be good for lungs, my first choice for a healing herb in the present was not chaparral, i.e. creosote.

Eventually I saw articles recommending pineapple, because of the bromelain in it,  to open airways. I remembered that I ate pineapple instead of using an epi pen when extreme stress hit me related to my condo which was built over a full outdoor toilet pit, and consequently had hydrogen sulfide inside, which seriously damaged my health.

So, reminded of bromelian, I ate an eight ounce can of pineapple chunks. To my surprise I began to feel better. That’s five days ago, and I’ve been eating a can every day since.

Other articles talked about ginseng which was said to improve lung function. That sounded like exactly what I needed, so I searched Amazon for Korean ginseng, which I had heard was the best. It was fairly expensive, but I ordered it since there was no point in saving money if I was going to die from a heart attack in the near future.

I also ordered some little bottles of Chinese ginseng, which had very good reviews, despite the fact some people found the little bottles difficult to open, which I understood when I received mine and was eager to give it a try.

I am definitely feeling a lot better. I still get winded really easily, but I’m not nearly as tired as I was last week when it felt like I was literally dying. I no longer seem to have a fever. I don’t have a thermometer, so I don’t have specific numbers to report. However, my forehead no longer feels hot. Best of all my jaw has stopped feeling paralyzed and intensely painful.

What I’m really curious to see, is if the bending fingernail returns to normal.

5/6/2020 ~ No, my bending fingernail is still bending. Sometimes my middle fingernail begins to bend, but that hasn’t become a constant. 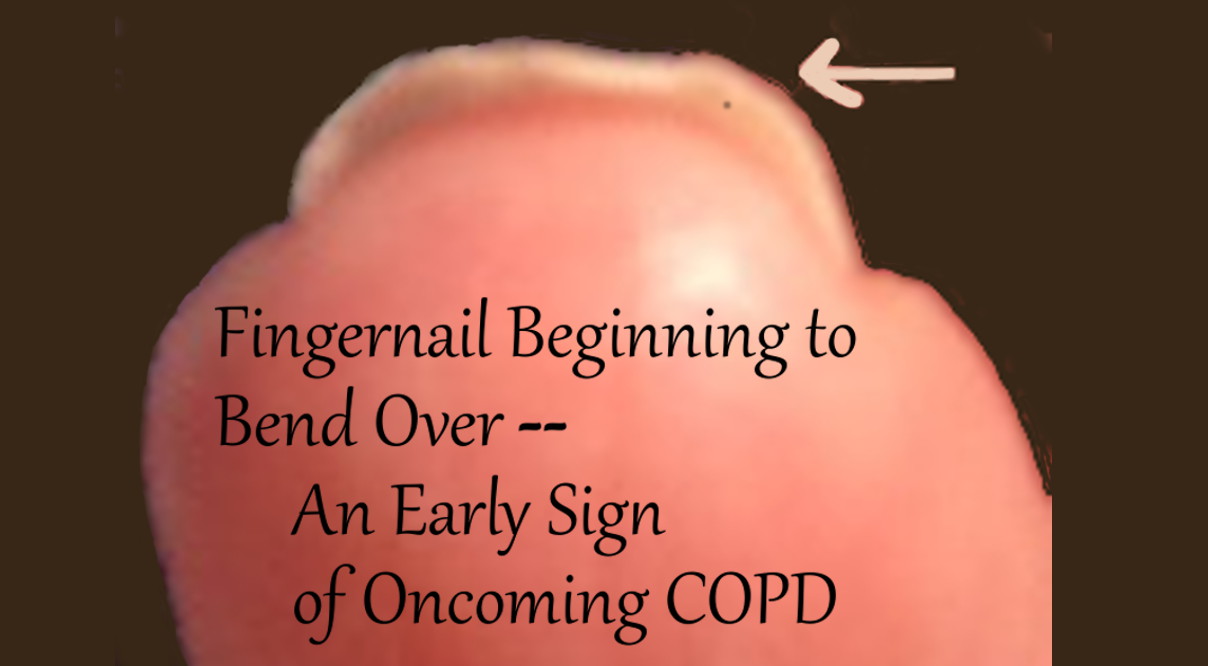