Shingles is a painful, viral infection of an area of nerves on one side of the body. It can be on either side, but not both. Because shingles infects nerves it’s good to know about shingles and vitamin B12. Vitamin B12 is particularly good for nerves and helps a lot.

Next to “vitamin B12”, painful is the operative word. Shingles is very, very painful. Up until I had shingles, peripheral neuropathy was the most painful nerve problem I’d had, and that was extremely painful, especially when I also had tetanus.

If you’re wondering, Yes, shingles was worse than Sciaica. So, it’s good to know about shingles and vitamin B12 for the pain. 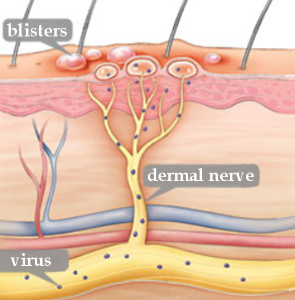 Shingles is caused by the varicella-zoster virus which causes chicken pox. After you’ve had chicken pox the virus remains in your body, but dormant. Then, stress, injury, a weakened immune system, or combination that seem like nothing more than old age “wakes” it.

Shingles is not contagious. Although, contact between someone with shingles and someone who has not had chicken pox may give chicken pox to the person who hasn’t had it.

As an aside, varicella-zoster virus is one of eight herpes viruses that infect humans.

Burning pain and vitamin B12

Before I knew I had shingles, before there were any outward signs, there was a burning pain in my thigh that reminded me of how tetanus, a central nervous system disease, had affected my peripheral neuropathy by increasing the burning pain tenfold, making it just on the edge of screaming bad.

The peripheral neuropathy pain was so intense that I had begun using a prescription I’d been given sometime earlier by a holistic M.D. for a vitamin B12 shot a day. The prescription provided 12 bottles of injectable cobalamin and needles. I hadn’t filled the prescription earlier because I’d never heard of that much injectable vitamin B12 being used, and I was skeptical. At the time I had very little understanding of healthy vitamin B12 levels.

Based on that experience, when I began to have the intense burning pain on my left thigh that was very like peripheral neuropathy, I began using two 5 mg. methylcobalamin B12 lozenges, every four hours.

What happened next made it clear that the problem wasn’t peripheral neuropathy. Whatever it was, it came with a lot of fever blisters.

Google images pretty much match what I’m seeing on my thigh. Darn it! Darn it! But, on the other hand, I’m glad it’s not something horrible and fatal.

It’s pretty painful, and not just where the fever blisters are. There are sort of bands of pain, as if the elastic on my knickers is cutting into me. But, no elastic anywhere is doing that.

At first I’d thought the fever blisters were from being too hot at night, now that it’s warmer and I’m still using several candles a night. With that in mind, I’d soaked a cotton ball in alcohol and pressed it against them, hoping to make them go away.

Next day, lots more patches of blisters had appeared, making me worry about what was going on with my health. At this point the pain reminded me that my grandfather had shingles and had talked about the pain. That made me google “shingles.”

I learned that shingles is a variation on cold sores… “herpes.”

So, knowing that I’d used vitamin C to get rid of cold sores I began using 2 grams of vitamin C with a half a mug of coffee ever half hour. After two hours, I switched from coffee to water. I kept “pain”, shingles, and vitamin B12 in mind as well, and didn’t stop using the methylcobalamin lozenges.

By evening it was beginning to itch as if it was healing. But, significant pain continued. Two days later, MUCH better.6″]

Shingles, like flu, is caused by a virus. so, my experience with shingles reinforced my determination to keep vitamin C on hand to ward off flu. Maybe I should have named this page Shingles and Vitamin B12 and C.

2/24/13 ~ The above picture was taken rather early in the day. The limited light has made the skin color darker than in the first image which had been taken when there was more sunlight.

The image shows that the blisters became larger, more bloated, and a much darker color with intensified reddening around them. The bloating was actually reduced  by using an Epsom salt compress prior to this picture. That is, the tops of the blisters had become somewhat flattened.

Ten Days Later – 3/6/13 ~ The blisters aren’t entirely gone, but they are clearly fading: drying out and fading into nearly imperceptible dots.

There was one day of horrendous itching, but still, preferable to the pain.

One aspect of the pain surprised me. It was in my abdomen, in muscles and nerves I didn’t pay attention to until I had tetanus and the lightest touch to that area caused muscle contractions in my back. I would immediately cease all movement and try to relax since when the contractions got into full swing they were screaming-painful.

Of the people I know who’ve had shingles, not everyone experienced abdominal pain.

Because of the dissimilarity of the pain among people I talked to, I have to wonder if shingles tends to be worse in nerves that were previously extremely stressed or damaged.

The pain in my abdomen was reduced very little by vitamin C. It responded primarily to Ibuprofen.

For the first few days I took 2 of the 600 mg Ibuprofen at approximately 7 hour intervals. About an hour after taking the Ibuprofen the abdominal pain began to disappear. It returned about 6 and a half hours later.

I tried to extend the time between taking Ibuprofen. However, I soon realized that if I let the pain get really bad, it took longer for Ibuprofen to help

Once I discovered that, I set a schedule for taking Ibuprofen and stuck with it for several days until it was clear I could go more hours between doses.

Additionally, when the weather became warmer I sat outside in the sun, letting the sun shine on the shingles. That helped dry them out. Overall, it seemed that the sun helped with the pain and itching, as well.

3/13/13 – I’m still using Epsom salts soaks for my feet every few days. After each soak I feel much better, so my impression is that the Epsom salt draws out the infection that caused the fever blisters and whatever residual infection there is from having had the shingles outbreak.

Final Words on my Shingles Experience – My feeling is that I got shingles because of extreme stress. Part of the stress was sharp pain every time I took a step or sat down from a standing position.

If I were better at facing challenges without letting them make me feel stressed, I think I would also have avoided getting shingles.

I’m not sure what it is in my body (our bodies) that allows stress to manifest as infection, but I would guess it has to do with basic metabolism and the basic body pH we maintain.

My guess is founded on the fact that vitamin C so clearly reduced the discomfort I experienced. That being the case, I should probably say that I believe stress affects my body (our bodies) because it lowers body pH, making us susceptible to illness.

As an aside, while I took pictures of the shingles on my thigh, I also had them on my back. But, there was no way to take pictures of those. All of the fever blisters were on my left side. Apparently peculiar to shingles: blisters appear on only one side of the body.

If you get or have shingles, I hope you have vitamins B12 and C to hand as well as Epsom salts. Those three things, in combination with Ibuprofen to lessen the pain, will greatly reduce the severity of your suffering.

I hope sharing my experience is helpful.

Shingles and vitamin B12 affirmed

A doctor in England read my description of shingles and vitamin B12 and tweeted me. He said many doctors in England had regularly recommended vitamin B12 “jabs” to people with shingles.

He said that the recommendation has fallen into disuse, but in his experience vitamin B12 is as effective now, as it was then.

I should have taken more pictures to show that it took many months for the fever blister marks to fade.

The length of time I could see where the fever blisters had been gave me the impression that the pain had been so intensely bad because shingles is a very deep problem.