My all time favorite articles talk about healthy vitamin B12 levels being 500-550 pmol/mL and above. Japan’s low normal for B12, for instance, was 500-550 because at lower levels dementia and memory loss appear. Conversely, in the U.S. the low normal is 200 pmol/mL, the level at which blood abnormalities begin to appear. (Sadly, Japan has since lowered its level.)

Besides talking about healthy vitamin B12 levels, the researchers talk about people with gastritis and celiac disease. In each case the researchers suggest cobalamin/B12 therapy.

Overall, they conclude the current “low normal” for vitamin B12 of 200 needs reassessing.

Rather than relying on charts, which may be misleading, refer to your fingernails for clues to the health of your B12 level.

MOLNYCKE, SWEDEN. Swedish researchers have discovered that many older people are deficient in vitamin B-12. Their study involved 368 men and women aged 75 years or older. Analysis of blood serum showed that 11 per cent of the participants were deficient in cobalamin (vitamin B-12). The researchers point out that a vitamin B-12 deficiency has been linked to neuropsychiatric disorders such as memory loss and dementia. The researchers discovered several cases of gastritis (inflammation of the lining of the stomach) and two cases of celiac disease among patients with low serum values of cobalamin. They conclude that routine screening for a vitamin B-12 deficiency is justified in the case of older people.

In a separate letter to the Journal of the American Geriatrics Society doctors from the Union Memorial Hospital in Baltimore report on a case of vitamin B-12 deficiency. The patient, an 85-year-old man, had developed progressive memory loss and lethargy over a two-year period. Although his serum level of vitamin B-12 was within the currently accepted range, the doctors decided to proceed with vitamin B-12 therapy. The patient received an intramuscular injection of 1000 micrograms of vitamin B-12 for three consecutive days, then 1000 micrograms weekly for a month, and then one injection every month. By the fifth injection his mental status has vastly improved and his lethargy had completely vanished.

The doctors conclude that the levels of serum vitamin B-12 concentrations currently considered normal in the United States may be too low and should be reassessed. The lower limit of 200 pg/mL is based on the level which causes abnormalities in the blood (pernicious anemia). In contrast the lower limit in Japan and some European countries is 500-550 pg/mL and is based on the level which causes mental manifestations such as dementia and memory loss. The doctors suggest a trial of vitamin B-12 therapy in patients with borderline cobalamin serum levels as it is effective and inexpensive.

Healthy vitamin B12 levels across the globe

The reference range for vitamin B12 in different countries varies. In fact, reference values may vary markedly among populations and cultures. One reason for this is that diet varies significantly. The laboratories of any particular country are expected to investigate values in relation to their population. But, the reference range seldom reflects healthy vitamin B12 levels.

Research at the beginning of this article says some European countries have low normals for B12 of 500-550, like Japan. But, Google has not helped me find which countries. It’s possible that since 1996 when the research was published drugs were developed to use for particular symptoms of low vitamin B12. Restless Leg Syndrome is one example. As pharma profited they may have shared a bit with laboratories to encourage continued use of the low normals in processing B12 tests.

Low normal for B12 in England

The low normal for vitamin B12 in England has been as low as 150. At 150 some patients had hair loss that was diagnosed as Alopecia, and said to be a permanent disorder. But, when those patients received B12 injections and reached healthy B12 levels their hair grew back and depression went away.

The doctor who most prescribed vitamin B12 instead of drugs came under fire from orthodox medicine. 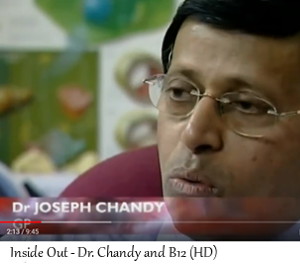 The video is worth watching for its view of patient experience vs medical professionals’ opinion.

Doctors and General Practitioners (GPs) in England are advised that the ‘normal’ reference range of serum B12 in blood tests is between 180 – 1132 pmol/mL and that only deficiency needs to be treated. This often translates into denial of treatment for nerve disorders which are known to exist at low normal levels of vitamin B12. In fact some research articles say that although a patient’s vitamin B12 was raised to a normal level the nerve issue did not resolve.

Dr. Chandy’s approach differed from the medical norm in that he treated until the patient regained a much higher level of health. He treated based on visible health results, rather than achieving a particular blood test “score”.

I found that when I had to rely on US doctors for an injectable cobalamin prescription they did not take my reports of how the injections helped me as meaningful. Begging fell on deaf ears. It was only when I discovered that Methylcobalamin lozenges work as well as injections that I was able to maintain higher levels of health for myself.

In England doctors generally treat vitamin B12 deficiency by intramuscular (IM) injection, and no more than once every three months.

Sufficient vitamin B12 levels are those greater than or equal to Health Canada’s recommendation of 148 pmol/L. In a recent email I received, a Canadian wrote that the range on her report is 138 to 652. She wrote, “The report (requested by my doctor), was from my blood samples, taken and analyzed by LifeLabs Medical Laboratories in Milton, Ontario (1/2 hour west of Toronto, Canada).”

I can’t find an official number

A study showed Korean centenarians’ serum vitamin B12 to be 393.2 pg/mL in males, 405.5 pg/mL in females despite lifelong diets of grains and vegetables.

Traditional home-made fermented soybean foods such as Doenjang, Gochujang and Chungkookjang contain higher amounts of vitamin B12 than factory-made.

Kimchi’s vitamin B12 content derives from the fermented fish sauce.

Korean centenarians don’t use supplements, and few B12 fortified foods exist in Korea. Some edible algae and seaweed, including laver, contain large amounts of B12 but there’s debate as to bioavailability. Be that as it may, high consumption of seaweeds would be partly responsible for the normal status of vitamin B12.

Serum vitamin B12 level cut-off 145 pmol/L. A cut-off level is the point which segregates a result as being either positive or negative.

A study seeking to establish vitamin B12 reference values for young Ugandan adults, to be used as baseline information, found a range of 117–1158 pg/ml. This range was adjusted “to the 2.5th to 97.5th percentile” to read as 152 to 1029 pg/ml. These results were considered to show no borderline or actual deficiency. The results were considered comparable to values obtained in Germany of 191 – 663 pg/ml and the USA of 211 – 946 pg/ml.

Normal value ranges may vary slightly among different laboratories. Some labs use different measurements or may test different samples. Talk to your provider about what your specific test results mean.

Labs are quick to say “what abnormal results mean”. As for instance, “Values of less than 200 pg/mL are a possible sign of a vitamin B12 deficiency.” Labs fail to test for or talk about healthy vitamin B12 levels. 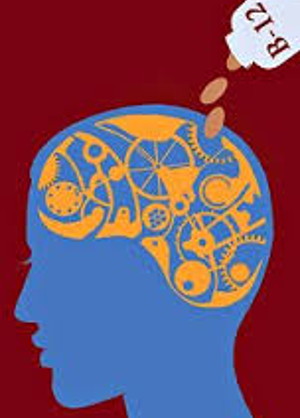 From the Townsend Letter for Doctors and Patients – 2006

It’s interesting to consider what proportion of Alzheimer’s Dementia (AD) may result from under-nutrition. Especially when low-cost, perfectly safe nutrition may allow people to avoid a miserable illness some consider worse than death. People might say, “That’s too good to be true!” But, an at-home nutritional program, using a lot of vitamin B12 may indeed prevent and virtually eliminate AD. Early treatment soon after first warning symptoms could turn off the process.

Let’s start with a little background. Mammals, including humans, are born with serum levels of vitamin B12 at about 2,000 pg/ml. The level declines throughout human life. Below 550 to 600 pg/ml, deficiencies start to appear in the cerebrospinal fluid. But, US clinical laboratories regard 200 pg/ml as the lower range of normal.

“Most cases of Alzheimer’s dementia are actually missed B12 deficiency cases, because of the too-low normal range for B12,” according to John V. Dommisse, MD, in Medical Hypotheses, 1991. His work confirmed that Alzheimer’s results from too-low serum vitamin B12, and, that B12 repletion succeeds despite other risk factors. “Repleting B12 reverses 75% of B12 deficiency dementias when the condition is discovered early enough.” 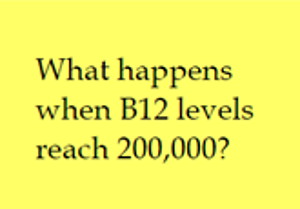 In comparison to reducing hematologic effects of B12 deficiency, reducing neurological and cerebral manifestations of B12 deficiency requires larger dosages over more time. B12 therapy appears to be perfectly safe; in other words, the risk of overdose is virtually nil. Patients of Dr. H.L. Newbold in New York City injected themselves three times daily with triple-strength doses of B12 (9,000 ug/micrograms/per day) indefinitely. Their serum B12 levels reached 200,000 pg/ml but none had any significant side effects.

WASHINGTON (Reuters) – Before becoming pregnant, women need to get enough vitamin B12 in addition to folic acid to cut their risk of having a baby with a serious birth defect of the brain and spinal cord, researchers wrote in the journal Pediatrics.

Their study involved 1,200 women in Ireland. And, showed that those with lowest B12 levels were five times more likely to have babies with neural tube defects.

Neural tube defects lead to lifelong disability or death. The most common ones are spina bifida, where the spinal cord and back bones do not form properly, and anencephaly, a fatal condition in which the brain and skull bones do not develop normally.

Dr. Mills, a researcher in NIH’s National Institute of Child Health and Human Development, said he hopes awareness of the role of vitamin B12 reduces neural tube defects.

“An absolutely critical point is that women have to consider this before they become pregnant because once they realize they are pregnant it’s likely to be too late. The developmental events involved in these birth defects occur in the first four weeks of pregnancy,” Mills said.

Mills urged vegetarian and vegan women and those with inflammatory bowel disease preventing B12 absorption to be aware of B12.

The researchers suggested that healthy vitamin B12 levels for women before getting pregnant  should be above 300 nanograms per liter.

In reading vitamin B12 research I’ve noticed that older research found vitamin B12 to positively help in various diseases and conditions, while newer research questions how much it helps. Newer research appears (to me) prejudiced against vitamins in order to favor prescriptions. Pharma likely pays for the research that makes prescription drugs seem the better choice. In concert with that, a very low “low normal” increases the need for medical help and prescription sales benefit.