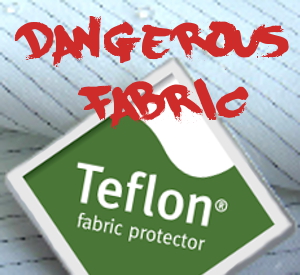 So, is Teflon as safe as they say it is? I mean, Teflon gives off dangerous fumes when it is heated to a temperature that will brown onions, that sounds dangerous to me. Which makes me wonder, do I want Teflon on my clothes?

Maybe Teflon’s only as dangerous as snow ~ a little’s fine, but with an incline to it, a lot can avalanche. Since cooking with Teflon kept giving me flu symptoms, I’m no longer inclined to use Teflon. In fact, when I complained to Farberware about my flu symptoms when I used their Teflon pans to brown onions, Farberware replaced my pans with stainless, at no charge. I don’t think they would have done that if they weren’t aware of a problem.

The fact is that an underlying chemical associated with Teflon is admitted to be problematic. That’s perfluorooctanoic acid (PFOA), sometimes referred to as C8. PFOA is a man-made chemical essential to making Teflon. Pro-Teflon literature says PFOA is “burned off during the process (of making Teflon) and is not present in significant amounts in the final products.”

Given that studies have found PFOA present in just about everyone’s blood in the United States, the Pro-Teflon literature sounds very like what I was told about hydrogen sulfide when hydrogen sulfide was found in the condo I bought, “It’s no risk at all, it’s perfectly fine if it’s at low levels.”

How are we affected? 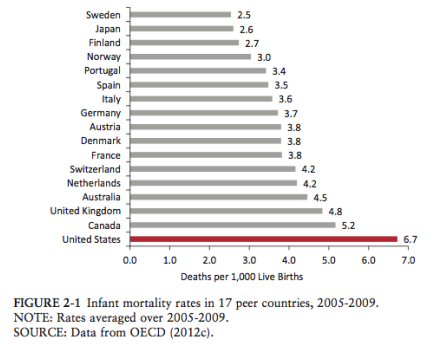 I was surprised to see US infant mortality rates compared to other countries, though with my “safe levels of hydrogen sulfide”  experience, I probably should not have been surprised.

The infant mortality graphic comes from OEcoTexiles which has a lot of information on chemicals we in the United States commonly make a part of our lives, and possibly unknowingly, our deaths and the deaths of our young. For instance, the site has this to say:

Since the middle of the last century, we have allowed a slew of chemicals (numbering now over 80,000) to be used in products – chemicals which were untested, many of which we now know to be harmful. In 2009, tests conducted by five laboratories in the U.S., Canada and Europe found up to 232 toxic chemicals in umbilical cord blood samples of newborns.

The reason PFOA is a particular health concern is that it can stay in the environment and in the human body for a long time. Significantly, studies have found that PFOA present at low levels in just about every American’s blood. How can that be, you may ask. The answer is simple: PFOA and similar chemicals can be found at low levels in some foods, drinking water, ski wax, fabrics and carpeting. You may buy a stain resistant carpet with the best of intentions, only to have it blemish your health, or the health of your children. It turns out, you see, that non-stick cookware is only one source of exposure to PFOA, and possibly not even a significant one.

What are PFOA risks

Studies in lab animals found exposure to PFOA increased the risk of tumors in the liver, testicles, mammary glands, and pancreas. Although well-conducted animal studies do a good job of predicting which exposures cause cancer in people. But for PFOA, there are differences in how animal and human bodies handle the chemical. Because of these differences, it isn’t clear that this chemical would cause as much cancer in humans as it does in animals.

Nevertheless, human studies have shown that people with workplace exposure to PFOA have higher more bladder and kidney cancers.

Article Name
Dangerous Fabrics
Description
Teflon gives off dangerous fumes when heated to a temperature that will brown onions, that sounds dangerous to me. So, I wonder, do I want Teflon on my clothes?
Author
Karen Kline
Publisher Name
Health Boundaries
Publisher Logo