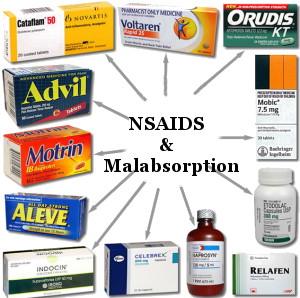 Some common painkillers interfere with B12 absorption

NSAIDS are Non-Steroidal Anti-Inflammatory Drugs that, although useful in killing pain, can damage your stomach and reduce the amount of vitamin B12 and magnesium you can absorb from food.

When NSAIDS damage your stomach they make it hospitable to h.pylori, a spiral bacterium that burrows into your stomach lining and begins shutting off stomach acid production.

Less stomach acid may sound like a good thing, but it’s not.

You need stomach acid to release vitamin B12 and magnesium from food. The less stomach acid you have, the more attractive and hospitable your stomach lining is to h.pylori. As the h.pylori population grows your vitamin and mineral absorption dwindles.

With NSAIDS and malabsorption you can eat foods rich in vitamin B12 and get no benefits from the vitamin whatsoever.

Ibuprofen is an example of an NSAID

7/25/2015 ~ I’ve used a lot of Ibuprofen over the years. When I learned about Serrapeptase, a natural anti-inflammatory, I began using Serrapeptase and found I needed far less Ibuprofen, nevertheless I still use one or two Ibuprofen a day. But given what I recently learned, that must change.

Merck has the following to say about NSAIDS (non-steroidal anti-inflammatory drugs), which include Ibuprofen:

Increasing the h.pylori in your stomach is an example of NSAIDS promoting “mucosal inflammation”. Also, h.pylori causes peptic ulcers leading to stomach cancer.

12/15/2020 ~ Further to the above I watched a few of Dr. Gundry’s videos and was stunned to learn that taking an ibuprofen is like throwing a grenade into your stomach, in terms of the damage to your good bacteria.

Since I learned that I haven’t used Ibuprofen at all.

For some things related to stress I use Ashwaghanda. About a half an hour after taking two, with a cracker or some other food, I feel as if I’ve had a margarita and no longer feel nearly as stressed.

Ashwagandha is called an adaptogen. It helps the body adapt under stress so that the stress isn’t as damaging.

A bit technical but worth knowing

Because NSAIDs like Ibuprofen reduce Prostaglandin production, you need to know a little about Prostaglandins to understand the damage NSAIDs do.

Some Prostaglandins inhibit blood clotting. Ischemic strokes happen when a blood clot (thrombus) or a fatty deposit blocks an artery to the brain.

Given that strokes run in my family I’m shocked I didn’t know I was courting a stroke by using so much Ibuprofen.

When you aren’t using NSAIDS, the walls of your blood vessels happily synthesize adequate amounts of these essential fatty acid compounds (Prostaglandins) which function in preventing dangerous clots. Interestingly, the same Prostaglandin may stimulate a reaction in one tissue and inhibit the same reaction in another tissue. How these fatty acid compounds work depends on the type of receptor they bind with.

The minimal Prostaglandin background above shows that by decreasing Prostaglandin production, NSAIDs reduce gastric blood flow. Less blood flow reduces HCO 3 (bicarbonate) secretion and decreases cell repair and replication. Thus, the more Ibuprofen you use, the more Tums you need in order to make up for the decrease in natural bicarbonate production.

Because NSAIDs are weak acids and are non-ionized at gastric pH, they diffuse freely across the mucus barrier into gastric epithelial cells, where H+ ions are liberated, leading to cellular damage. To avoid this problem some NSAIDS have been developed that produce fewer adverse stomach problems.

However, the NSAIDs that result in fewer gastric ulcers tend to result in more heart attacks and strokes, as were seen with the use of Vioxx which was taken off the market after 27,000 adverse reactions to include deaths.

Back to NSAIDS and malabsorption

NSAIDs and H. pylori disrupt normal mucosal defense and repair. For example, your stomach lining/mucosa, becomes more susceptible to acid. As a result, H. pylori infection (see Helicobacter pylori Infection) is present in 50 to 70% of patients with duodenal ulcers and 30 to 50% of patients with gastric ulcers. If H. pylori is eradicated, only 10% of patients have recurrence of peptic ulcer disease, compared with 70% recurrence in patients treated with acid suppression alone. NSAIDs now account for 50% of peptic ulcers. Merck Professional Manual on NSAIDS

I forget whether I stopped using Ibuprofen the day I began this page, or the next day. But either way, I have stopped. Except, Ibuprofen apparently lowers rates of Parkinson’s disease.

Some very interesting research links lower rates of Parkinson Disease with Ibuprofen use.

Adults who regularly take ibuprofen are 38% less likely than nonusers to develop Parkinson’s disease, and the risk further decreases with higher frequency and duration of ibuprofen use. Regular use of ibuprofen is associated with a significantly lower risk for Parkinson’s disease than is use of aspirin, acetaminophen, or other NSAIDs, according to the results of a study published in the March 8 issue of Neurology.

So, when I find myself trembling from the stress of dealing with Wells Fargo’s foreclosure action (since they didn’t serve me, which is a denial of due process, everything Wells Fargo does now makes me uneasy, as if there’s some element of trap in it) I take an Ibuprofen and find the trembling stops.

Though, since I learned about how harmful Ibuprofen is to good bacteria in the digestive system, I haven’t used Ibuprofen at all. At the same time, I have been using ashwagandha and I haven’t had that shaking thing from stress. So, maybe ashwagandha helps avoid parkinson’s as well… Hope so.

Each morning I now make it a point to walk around my garden. That’s about the distance of a lap in an Olympic size pool. The walking stimulates my metabolism as well as limbering my muscles. I also walk the entire length of my house a couple times when I go to or from the kitchen. My house isn’t large, but the additional distance, again about the size of a big swimming pool, increases my circulation. Overall I had less pain or discomfort of any kind yesterday afternoon than in at least a year.

Also, I ordered bulbs for my salt lamp. That’s because research I did shows that negative ions, like those produced by Epsom salt baths, pine forests, thunderstorms, heated salt lamps, etc. reduce Serotonin levels. That’s important because Serotonin increases the sensation of pain.

I’m not sure I should leave the salt lamp on overnight. It seemed to make me feel less sleepy, or, I could simply have been excited about it.