1/9/2021 ~ Sixty percent of the general population has a nosebleed at least once in their lifetime. In fact, nose bleeds are a common reason for emergency room visits according to Jessica Bode, MD.

Research associates nosebleeds with rhinotillexomania, compulsive nose picking, more often than anything else.

Not surprisingly, magazine articles on nosebleeds follow suit and blame nose picking. (They leave out the multi syllabic rhinotillexomania.)

Without any nose picking I periodically have a lot of nose bleeds. So, I kept looking for the cause.

ClinMed offered a hopeful paper, The Psychiatric Aetiologies of Epistaxis… translated from the medical, that says, The Psychatric Causes of Nosebleeds.

Of course, I thought Stress would lead the list, but no. LOL, I’d forgotten I was looking under “research”. Be that as it may, I’ll take you through some of their offerings.

The spontaneous bleeding can be from the ear canal, lower eyelids, and tongue, but apparently so rarely from the nose that only one case was noted. In that case “anxiety” was diagnosed and treated successfully with 12 sessions of psychotherapy.

Similar, but different, is hematohidrosis where there’s spontaneous, painless bleeding through unbroken skin after extreme physical and/or mental stress. While the bleeding most often comes from sweat glands it’s also associated with nose bleeds.

Then, there’s ADHD, Attention Deficit/Hyperactivity Disorder. A 2011 study of 34 children in Turkey found that those with recurrent nose bloods had a statistically significant higher rate of ADHD.

Apparently the same holds true for traumatic brain juries, that is, more nose bleeds. However, the paper waffled a bit when it noted that with both ADHD and traumatic brain injuries unintentional self injuries were more likely. 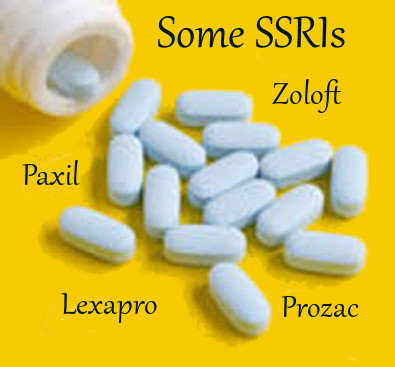 Next comes Latrogenic Sources. Latrogenic means caused by a physician, which therefore includes prescriptions. And, this is pretty interesting:

Selective serotonin reuptake inhibitors (SSRIs) are prescribed for the management of depression, anxiety, obsessive compulsive disorders, anxiety, bulimia, and phobia disorders [46,47]. Patients who are prescribed SSRIs are at an increased risk of upper gastrointestinal bleeding, intracranial haemorrhage, and post-operative bleeding [48]. This risk is additionally increased if non-steroidal anti-inflammatory medications and/or anticoagulation medications are concurrently used [49].

Despite the known relationship to bleeding there are only four studies of SSRIs and nosebleeds. In three of those cases the nosebleeds stopped when the SSRIs were stopped.

To me, it seems as if stress is involved in all of the above.

Maybe I’m cynical, but if stress had a corresponding polysyllabic medical term, would it get more medical respect and column inches?

Here’s the thing: I have noticed that I can have a nosebleed within milliseconds of having a very stressful thought. Maybe I’m exaggerating, and it’s seconds. But, very close to nearly simultaneous.

I love my plants, so a threat to them affects me at the core of my being.

Now, when I say “a very stressful thought” I do not mean something like the sentence I used to describe property management’s threats re my plants.

Putting the thought into words, intellectualizing it, seems to harness its effect.

What I mean by a very stressful thought is one which comes to mind in a flash with all its associated feelings.

The Mayo Clinic says this,

Your body produces a surge of hormones when you’re in a stressful situation. These hormones temporarily increase your blood pressure by causing your heart to beat faster and your blood vessels to narrow.

Most nose bleeds occur toward the front of the nose, with 90% of those occurring in Kiesselbach’s plexus located in the nasal septum. 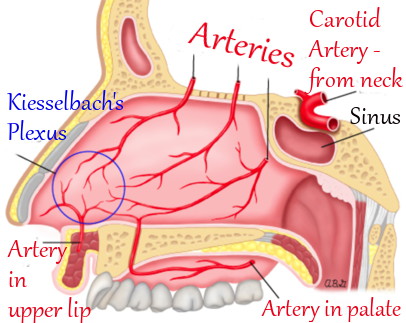 In the beginning, remembering that vitamin B12 plays an essential part in blood health, I would immediately go to my Methylcobalamin lozenges and put one under my tongue. That usually stopped the bleeding within a minute.

That in itself interested me. I wondered if the B12 could actually get so thoroughly into my blood stream so quickly that it could stop the nose bleed almost immediately.

Now that I’ve had so many nosebleeds as a result of extremely stressful thoughts re my plants, re covid, re Election Fraud, re Corporate Media, I’m thinking that the B12 lozenge doesn’t stop my nosebleed as much as my thought that it will stop my nosebleed.

Based on this theory, that it’s my thoughts starting and stopping m nosebleeds, I’ve taken to using affirmations to avoid the stress, as for instance, “I’m growing stronger.” Growing is such a good word because it reflects positive change, positive and visible, but slow.

I can see how prayer would work in a very healing way. After listening to a pod cast of Lin Wood talking about his faith in God, I felt how reassuring that kind of faith is.

I say, “that kind of faith” because he and I have a different focus. He has a Biblical view, whereas my faith is more intimate, more like the way I’ve heard Quakers describe their faith: religious truth via direct inner experience of god, relying on conscience in relation to morality — basically, emphasizing a direct experience of God. This is distinct from my Roman Catholic upbringing where ceremony and sacraments were provided as means to experience God.

Be that as it may, feeling God’s presence in the beauty in the created world, in prayer, in reading the Bible, etc. neutralizes stress and… I’m pretty sure reduces nosebleeds.

I also think it’s a good idea to keep your vitamin B12 levels up. As they say, God helps those that help themselves.

I watch a lot of dramas produced in other countries: S. Korea, Spain, Sweden, Russia, etc. The S. Korean dramas often show nosebleeds when a character has been under stress. Sometimes the character isn’t aware of the effect on their health, and a friend will point to the recurring nosebleeds.