This is a fingernail, Obviously.

Keep in mind, you need B12 for healthy nerves and blood, so that could be a lot of health issues.

Numbness, losing your balance or memory may be intermittent and seem trivial. They may, in fact, mean nothing serious. On the other hand, numbness can be a sign of low vitamin B12 levels and deficiency. It helps to know ridges on your fingernails, and loss of your moons point to the kind of B12 deficiency that could be causing the numbness and memory loss. In other words, B12 deficiency nails!

Being unable to find a word that used to come to mind easily is a more subtle sign of sinking B12 levels. Or, it could be a blip caused by increased stress.

What mental blips and physical problems like numbness have in common is they increase worry and the very stress that worsens health. It’s so unfair!

But you don’t have to be lost in stress and worry. There’s a sense of relief and things begin to look up once you know about B12. In that respect, vitamin B12 and your fingernails offer a kind of “roadmap” to health. If you see ridges on your fingernails, or see that you’ve lost your moons, you can easily begin using Methylcobalamin.

Cyanacobalamin is very common but has to be changed to one of the usable forms by your body. During the process, some of the potency is lost.

Using Methylcobalamin or Hydroxycobalamin turns your body in the direction of health, but it doesn’t instantly put you there. It’s like driving, once you learn you’ve been going in the wrong direction, you aren’t instantly where you want to be. Though, people beginning to use vitamin B12 often feel improvement within a day or two: mind fog lifts, numbness reduces, etc.. Just keep in mind that low B12 levels and deficiency affect your health from deep within your tissues. To actually turn your health around you need to give your body B12 over a period of time so that levels in deep tissue are replenished.

Within a month or two you will see ridges on your nails growing out and moons beginning to reappear. You will have less numbness, less confusion finding words, less tingling in your hands and feet, among other things. Check a comprehensive list of Symptoms of Low Vitamin B12.

The beauty of having a roadmap of your innermost health at your fingertips, or more accurately, on your fingernails, is that you can quickly turn your health around.

Aside from when you cut yourself, your nervous and circulatory systems are tucked away so neatly inside your body that you don’t think about them. And, that’s great. Except, one of the most serious dangers your innermost health faces is that you ignore it.

It’s surprisingly easy to remove that danger by looking at your fingernails, or feeling them for clues to your innermost health. It bears repeating that low vitamin B12 levels harm nerves and blood. While you can’t see your nervous system or your circulatory system you can see how they are doing by looking at and feeling your fingernails.

Ridges and no moons on fingernails

Two decades ago when I began my site the connection between vitamin B12 and fingernails wasn’t well known. In fact, I wondered if it truly existed. At the time I had huge ridges and no moons on many of my fingernails. I didn’t get a good enough camera to photograph my fingernails until 2006, when I took this iconic picture on December 29. (I say iconic because so many people have appropriated it. Many others asked permission to use it.)

My health suffered dramatically before I noticed the ridges. It continued to suffer during the time it took to begin vitamin B12 injections. But as soon as I had B12 injections the ridges grew less pronounced.

I correlated changes in my fingernails from B12 replacement with undeniable improvement in my memory, ability to sleep, depression, pain level and other health problems. That’s how I became convinced of the connection between B12 and fingernails. Pictures I took of my fingernails along the way show the improvement and confirm the fingernails/B12 connection, “vitamin B12 deficiency nails” if you will.

Is diagnosing health from fingernails new?

No! In 400 B.C.E. Hippocrates, father of clinical medicine, said fingernails reveal health and inner condition. He was the first person we know of to identify clubbing, where a fingernail bends over, as a sign of lung and heart disease.

Lung and heart disease are specific issues within two of our body’s hugest systems, our nervous and circulatory systems.

As in many things the initial signs of serious problems can be small and easy to ignore. For instance, did it ever occur to you that losing your balance might coincide with a drop in your vitamin B12 level and might signal the beginning of life altering nerve issues?

The fact is, fingernail ridges and faint moons often coincide with health problems involving balance, numbness, depression, memory decline, or in other words, low vitamin B12 signs. When you see ridges on your fingernails, take the hint and look at a comprehensive list of symptoms/signs of low vitamin B12 levels and deficiency.

Your fingernails can keep you current with your health, or impending lack thereof: Every six months you have a new fingernail. The rate of growth from cuticle to tip is about an eighth inch a month. As a result, your fingernails are constantly giving you an updated view of your otherwise hidden nerve and blood health.

Good vitamin B12 levels produce white moons at the base of each fingernail. When levels are low, the thumb’s moon is last to go. (Tessa Jupp, R.N., active in the Post-Polio Network, Dec. 2001).

Reading vitamin B12 research isn’t for everyone. Some research is dense with medical terminology. But, research gives you information and perspectives to help you choose what’s especially good for you with your body’s specific health characteristics.

Check out this comprehensive list of low vitamin B12 signs.

Just to be clear, with or without moons, you may have ridges on your fingernails. These can be faint, to very visible, even ridges on top of ridges that look like hogback hills. To see them clearly use a magnifying glass or reading glasses.

If you have faint, hardly noticeable ridges that look more like lines, you most likely have  few symptoms of low B12 levels. If you ignore early vitamin B12 and fingernails warnings, other symptoms will follow. But, if you take action you can reverse early damage to your nervous and circulatory systems.

Blueness under your fingernails indicates a shortage of red blood cells and by extension the oxygen they carry. For me, from the time I was a child until I had vitamin B12 replacement I had blueish nail beds. Doctors invariably diagnosed iron deficiency. Taking the prescribed iron brought pink to my nail beds and stopped the dizziness I otherwise experienced when I stood up, especially if I’d been squatting to pull weeds. The trouble was, the improvement never lasted.

B12 replacement changed that. From the time I began having B12 shots and later using methylcobalamin lozenges I have had pink nail beds and I don’t get dizzy when I stand up. Doctors no longer tell me I’m iron deficient.

Keep in mind that although low Vitamin B12 levels affect blood or nerves, or both, it’s not the same for everyone. What is the same is that red blood cells are supposed to divide. For many people a stomach disorder causes B12 malabsorption. If you can’t absorb vitamin B12 your red blood cells cease dividing and become large. When red blood cells no longer fit into tiny blood vessels you begin to experience numbness.

Vitamin B12 is safe because your body excretes what it doesn’t use. You needn’t worry that Methylcobalamin will hurt you. As a point of reference, I used five to ten 5 mg. Methylcobalamin lozenges each day for over 5 years before the cobalamin built up enough to cause muscle spasms/cramping.

Then, as soon as I began taking Cilantro capsules to bind B12’s cobalt, the spasms diminished in frequency till they went away. B12’s name, cobalamin, derives from cobalt, the essential trace element it contains. B12 is the only vitamin containing a metal.

Be aware that initial healing may result in painful muscle spasms if your potassium levels are low. Your blood cells need more potassium once they begin properly dividing. There are many potassium rich foods like potatoes and tomatoes. Eating Potassium Foods is the easiest way to end muscle spasms while blood cells are healing.

If you need B12 and use Methylcobalamin, your health will improve within two months. Significantly. I know from experience. If you keep notes, you will easily see (as well as feel) what has changed. But, without doubt B12 will help. (This is like Stravinsky who said, “Inspiration is never wrong. If it turns out to be wrong, it wasn’t an inspiration.” And, though true, I put the quote here to amuse you.

B12/Methylcobalamin lozenges work even if you have B12 malabsorption illness, which is increasingly common in people who are under stress and/or take antacids or certain other medications. Lozenges work because the B12 is absorbed directly through the membrane under your tongue. 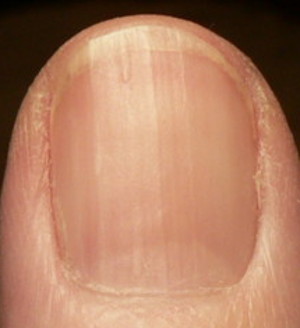 The photos show fingernail lines in the texture of the nail. They also show moons in various stages of return and, when there was a lot of stress, retreat. 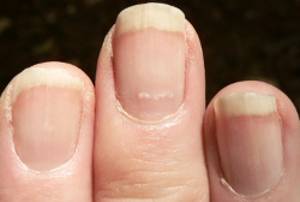 White spots can appear suddenly on fingernails. They often appear in relation to extreme stress and may be accompanied by a “sick” feeling, to include feverishness, that lasts for days or even weeks.

In real life they look like pimples under the fingernail and different from white spots. 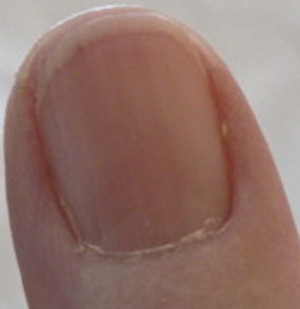 Redness under fingernails ~  Often associated with an infection somewhere in the body.

3 thoughts on “Vitamin B12 and Fingernails – Your Roadmap to Health”