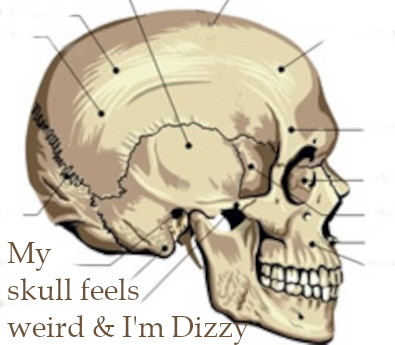 10/5/2021 ~ I’ve been dizzy for a few months. Sometimes it’s so severe it’s debilitating. The scary part is swelling and lumps around my skull, but particularly behind my left ear and toward the top of my neck.

No, I don’t think the bone of my skull is bulging. The swelling feels kind of spongy. The swelling at the back of my neck feels rather more solid and keeps my neck from moving freely.

I’m sure if I went to a doctor there’d be a slew of tests and possibly an eventual medical name for the problem/condition. Thing is, I’m not keen on doctors given past experience to include a doctor telling me I could not be B12 deficient given the fact I’m not vegetarian. In that case a vitamin B12 test proved I had Profound Deficiency. Another doctor said I should be on Prozac for life, rather than use more B12. I ignored him, used more B12 and my depression went away.

The swelling scared me enough to order Turkey Tail mushroom capsules based on the fact Paul Stametz mother had advanced tumors that went away when she was in a trial for a new breast cancer drug. Of the 50 people in the study, she was the only one who had the tumors completely do away.

Although I was worried about brain tumors, I didn’t seem to have any of the problems a man I worked with, when I was a Realtor, had before he was diagnosed with brain tumors… and died.

What seemed likely is that all the stress since I bought an expensive XPS Dell computer, thinking that my life mostly revolves around my computer so it wasn’t altogether extravagant. The XPS gave me horrible problems and Dell techs made Karen jokes rather than sorting out problems they should have known how to solve. Plus, when I complained I suddenly began getting tons of harassment calls. Meanwhile, their supervisor said that if I asked for more help, he was going to see to it my operating system was wiped and I lost all my documents. Yes, not friendly. It made me so stressed my heart couldn’t take it and my ankles swelled as my heart was no longer able to pump optimally. Plus, walking a few steps made me out of breath.

Then property management began threatening, their approach since I moved in. They liked dogs and didn’t like my plants. They said I had to get rid of my “clutter”, their name for my plants.

Then the sewer for the entire building backed up into my flat. Besides visibly puddling sewage, there was sewer gas bubbling out of the kitchen sink, which property management entirely ignored, until finally the visible sewage was so drastically visible and smelly that they had to do something.

Ticked that I had complained, property management refused to help me set up online rent payment and put an eviction notice on my door. Major stress. Just Major. And, they kept it up, so there were boundless sleepless nights.

When, a new property manager came to the complex she was much nicer and behaved in a more truthful way, and I was feeling better. So I ordered a 4 door cabinet to kept my gardening things in, in my living room, where within the cabinet they wouldn’t look like a mess. But the cabinet’s top did not attach per the instructions and trying to get support was extremely stressful because they had sort of the Dell tech attitude.

The point is that in the end the stress was more overwhelming than ever in the past, probably in part because I’m 76 now and I’m getting worn down. It seemed to me that the swelling may have been caused by the stress activating something that had been lurking in my body, waiting for my defenses to be down.

Now, in the past vitamin C always sorted out infections, even tetanus. (Doctors wouldn’t see me at the time because I didn’t have enough money.)

So I tried vitamin C for the dizziness. In order to use a lot of C I ate a lot of cheddar to offset vitamin C’s tendency, when taken in large amounts, to cause diarrhea. Problem was, I’d used masses of vitamin C after the sewer backup to get rid of a horrible itchy rash it appeared to have given me. Weirdly, I needed more C for longer to control the rash than I’d needed to combat tetanus. And, since using so much vitamin C I was no longer able to use it at a rate of 24 or more grams a day as I had when I had tetanus.

I wasn’t getting much improvement when I was using one or two grams of vitamin C every hour or two during the morning and afternoon. So I upped it to three, then four grams. That did the trick. The lumps and swelling went away and I’d feel much better. But come late afternoon I had to stop taking C and by the next morning the swelling would be making me dizzy and heavy headed again.

I was using 240 relatively expensive vitamin C capsules pretty quickly when my order got lost.  I have Walmart+ which is a service that’s $100 a year for unlimited free deliveries if the order is over $35. So I ordered my ordinary groceries  and an $8.99 bottle of 250 vitamin C tablets, each 1,000 mg. I was delighted with the savings until on the second day of using them I began feeling very bad, as if my head had swelling pressure pushing on it from all sides. I wondered if I’d wake up the next morning or have a stroke during the night. I was seriously scared.

Luckily my good vitamin C arrived and began making a significant difference. Except during the night the swelling would come back. Still, that was better than diarrhea during the night from taking vitamin C in large amounts in the evening and into the night.

I ordered oranges, mandarins, guava, pineapple, and avocados to eat at night. They were delivered today… so we’ll see if eating them during the late afternoon and evening keeps the swelling from coming back over night.

I had to google how to eat a guava, and found this:

Feel free to simply rinse the guava off and dive in, eating the rind and the seeds. In fact, the rind of a guava has more vitamin C than an entire orange. Sometimes they have tougher seeds that you may find unpleasant, though they are completely edible. Aug 29, 2017 How to Eat Guava | Epicurious