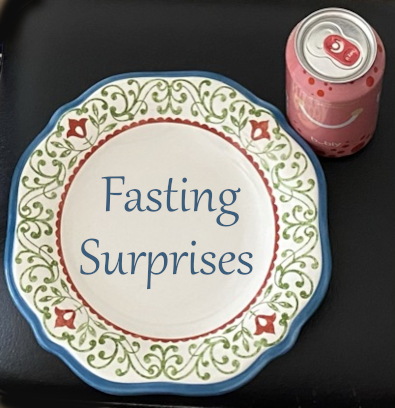 6/15/2021 ~ There’s been a lot of stress recently (or should I say, as usual) with the result that I’ve been exhausted with a total lack of interest in eating. To be more precise, what I’m describing was most intense about a month ago. Just getting up from a chair felt like I was having to move a ton of cement. And, I was constantly out of breath.

It occurred to me that since I wasn’t hungry I could easily start a fast. I’d read that one of the biggest jobs our bodies have every day is digesting food, so a fast gives our bodies a holiday, as it were.

I thought I’d probably be hungry the next day, but six days later I still wasn’t hungry. During that time (nearly a week) I drank sparkling water, plain water, two small bottles of ginger kombucha, and a small bottle of apple juice.

My energy level which I’d expected to diminish since I wasn’t eating, actually increased. But, I didn’t push it. I wanted to feel healthier, not chalk up completed tasks.

I toyed with the idea of not eating for a month. It seemed pretty doable. But then something came up, I forget just now exactly what, and I realized I’d better take steps to safely end my fast. On the seventh day I had a cup of coffee when I woke up, with creamer. I wish I’d done this page immediately so I could tell you exactly what easy to digest things I ate when I came off fasting. I didn’t eat a lot because apparently that’s not a good idea, but the fact was I wasn’t “famished” and I didn’t feel like I had to assuage a gnawing hunger.

Articles I’d read on fasting said that in a fast the phagocyte cells become more active in your body and they begin cleaning up unhealthy toxins and cells at a more rapid rate. I really liked that idea.

One thing that surprised me was that my allergies seemed to fade. I had been using a few time-release BComplex tablets a day. It’s great for reducing if not removing allergies. I used no BComplex and no vitamin C or spirulina for iodine for my thyroid, or Glucosamine Chondroitin during my fast. So I might have expected my eyes to itch, accompanied by a lot of sneezing not to mention joints getting squeaky again.

As I ended my fast I didn’t jump right into taking large amounts of vitamins and minerals again. And, to my surprise the infection around my old dental implants did not flare up, despite not taking quite a lot of vitamin C on a daily basis, as I had normally done before.

When I was beginning the fast I’d thought, “Well, if nothing else, I’ll lose weight.” But I didn’t lose weight, at least not as far as I could tell re clothes fitting any loser.

At the end of my fast I thought of it as similar to shutting down my computer and giving it a restart. I felt restarted.